“This is very serious, it is not pressure, but, if we cannot manage the entry into force on the July 1, then we have to change the date (into force) in the council and therefore, my suggestion is to do everything that can be done by the government and lawmakers to ratify it now,” Luxembourg Foreign Minister Jean Asselborn told The Korea Herald. 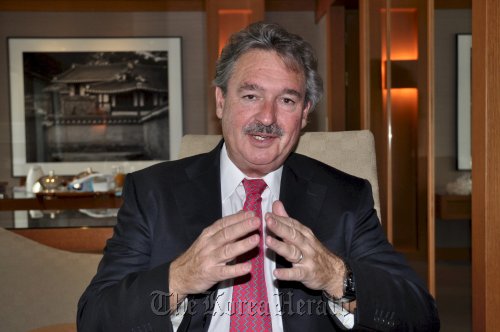 If the deal does not come into force on July 1, then “we (in the EU parliament) will have to make a new decision,” which could open Pandora’s box and start a “discussion of the substance” of the deal, which might fuel the fires for those who oppose the pact within the EU.

“Those who do not agree in the European parliament will have a chance to debate the entire deal again,” said Asselborn.

Asselborn did add that the agreement would not be canceled even if a new discussion within the EU parliament is necessary.

“We are not one government, the European Union is not an abstract entity, we are 27 countries with 27 different interests,” he said.

During lunch with Foreign Minister Kim Sung-hwan, both said they would push for the deal to take effect in July as agreed.

Asselborn pointed out that Japan was very mindful of the comprehensive deal that was signed between the EU and Korea and is looking for a similar pact, something that could deviate the interests of EU lawmakers.

“The Korea-EU FTA is the most important free trade agreement that the European Union has ever done, which is an important sign for Asia,” he said. “I hope we can manage it.”

The foreign minister also discussed improving the half-century bilateral ties between his country and Korea.

In business, several Korean companies have picked up the slack that was left behind when United States and Japanese companies left Luxembourg.

One of the most publicized deals happened about five years ago when Goodyear Tire and Rubber Company sold its global tire cord operations to Hyosung Corp. for $80 million.

Furthermore, other joint ventures have been reached between Luxembourg’s ArcelorMittal and Korea’s Samwha and Kiswire companies.

“With our important steel factories and our knowledge in other areas, it would be beneficial for both of us to start more joint ventures,” Asselborn said.

Other areas of cooperation could be found in satellite communications and logistics.

The fallout from the Fukushima Daiichi nuclear plant in Japan has spawned debate within the European Union over the reliability of nuclear power as an alternative and viable renewable energy source.

Asselborn believes that nuclear energy will not be the end-all solution for the European Union to achieve its targets of cutting emissions of greenhouse gases by 20 percent by 2020 compared to the 1990 levels, a 20 percent increase in the share of renewables in the energy mix and a 20 percent cut in energy consumption.

“That’s clear for us and clear for a lot of young people in the EU, and I think there will be a debate dominated by the fact that we want to come out of nuclear power and invest in renewable energies and solar energies,” he said.

“The young people in Europe, and I take my country for example, don’t want to live with this stress of nuclear energy.”

Another point Asselborn mentioned is that the European Union could be a model for regionalization and Korea, an important player in bringing this dream to reality.

Like Korea, Luxembourg is a shrimp nestled between two whales, France and Germany in Luxembourg’s case.

After World War II, Luxembourg played an important role in bringing France and Germany together ― “this role could be played by Korea” in relation to China and Japan.

“If Korea plays this role, it would be easier for the Chinese authorities to put more pressure on the North,” Asselborn added.

“If that happens, we are looking at a spaghetti effect that would create a link with the EU,” he said.