[ The Korea Herald – Send E-mail ]
Milos: Greek island with colorful array of beaches
By 김후란
Published : Apr 22, 2011 - 19:11
Updated : Apr 22, 2011 - 19:11
MILOS, Greece (AP) ― The Greek island of Milos is less well-known than some of the others in the Cyclades group of islands, such as the world-famous Santorini and Mykonos. But Milos, a volcanic, horseshoe-shaped island about 160 kilometers southwest of Athens, is a perfect beach destination, and with no major ruins of note, natural beauty is the main attraction.

Otherworldly rock formations decorate its coasts and the Aegean Sea provides a collar of the palest blue-green water on powdery white volcanic-ash beaches. Its most unusual feature is an array of colorful sand belts, running from cream to black, with pebbles of nearly every color.

Some are reachable after a long and bumpy adventure on dirt roads that stumble through the island’s rugged western hills. Some are reachable only by boat, spread out at the base of a cliff. Yet another is reachable by land, as long as you’re willing to clutch a rope as you scale a crease in the cinnamon-hued cliff above.

One guide book put the number of sand belts at more than 70.

The island is big enough to consume four days of solid exploration, but small enough at about 150 square kilometers to yield at least some of its secrets in that time. You’ll find plenty of Greeks and other Europeans on vacation here but despite the thriving tourist industry, massive ocean liners don’t call and the stream of tourists from the small airport and passenger ferries don’t overrun the island. There is bus service on the island, along with beaches that are footsteps away from restaurants. 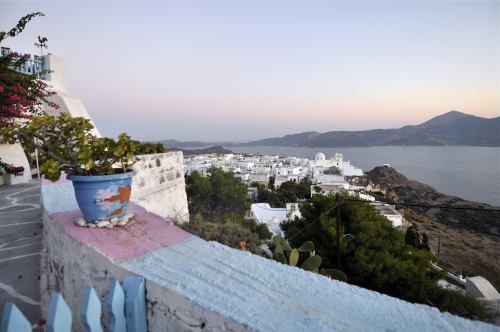 The sunset seen from the hilltop village of Plaka on the Greek island of Milos. (AP-Yonhap News)
Greece has been hard-hit by financial crises in the last 18 months, with occasional strikes and protests in Athens over austerity measures, and some shops closed in popular shopping districts as locals cut their spending.

But life in the islands, at least for visitors, seems far-removed from all that, and tourists in beach destinations such as Milos are unlikely to experience any disruption in their holiday related to the country’s larger economic struggles. Still, the island isn’t a fantasy land.

The real lives of the 5,000 or so year-round residents are more clearly on display here than on bigger tourist islands. The island’s long mining history (including the mining of two types of clay, bentonite and kaolin) still defines many hilltops and feeds many families.

My wife and I recently spent four days on Milos, finding ourselves exhausted in the evening by our pursuit of the beaches, but glad we also pushed ourselves to do a few other things. We clambered up the castle ruins atop the lovely whitewashed Cycladic village of Plaka at sunset and also took time out for a scenic drive to the laid-back northern town of Pollonia, where we lunched on octopus at Armenaki restaurant.

The sunlit alleyways of the village of Tripiti are gorgeous, as are the brightly painted fishermen’s boat garages slung along the water at St. Constantine on the northern coast. We also visited the volcanic pumice dunes that surround a small beach at Sarakiniko. At times, it looked like the moon, or a landscape covered in hastily whipped batter.

We stayed at a clean, small hotel about a five-minute walk outside of the lively port town of Adamas called Hotel Ostria. It is newly built, friendly and comfortable, not to mention sharply decorated. Its breakfasts were notable for the locally made pastries.

We also found a terrific meal at O! Hamos ― loosely translated, it means “What an uproar!” ― along the marina a short distance from the center of Adamas.

It’s pricey, and the servers struggled to keep up with the packed tables, but the bubbly atmosphere and big courtyard made it a nice place to sit and talk _ and write on the chairs as previous diners have done, if you like. Tender lamb chops and goat in lemon sauce cooked in clay pots made it a memorable meal.

Two of our days in Milos we rented a car and set out for farther-flung beaches.

We spent one exploring the western hills to find the tiny beaches that are at the end of winding and dusty roads, and tucked in the folds of the rocky coast ― practically invisible until you stumble onto them.

When you go, fill the tank, pack plenty of water and food and don’t hurry: The spider-webbing roads are poorly signed and barely maintained in spots.

If you have the time, it’s worth the adventure to find the small, pleasant beaches, such as St. John, where there’s shade and room to swim, although no amenities.

One day, we drove along the southern coast to the black volcanic sand beach of Gerontas. It’s easier than some others to find, but you’ll need a sturdy pair of shoes for the walk. From a dirt lot above the coastline, we followed a mining company road before clambering down a ravine to this soft sand beach.

It’s big enough to allow 30 or 40 people to feel secluded, while the rocky cliffs provide shelter and a little shade. The swimming is easy in the calm waters, and there are rocky caves, outcroppings and even an arch for entertainment.

Guided beach tours in Milos, some by kayak, some by boat, are big business. And for good reason ― a lot of the beaches worth visiting are only accessible by boat.

After eating at one of the bustling tavernas that jostle for space around the marina in Adamas, we surveyed the many tour boat operators who set up their billboards side by side to market their services, all for about $72.

We were immediately attracted to Elias Xidous, a smiling, hardworking man who clearly took the quality of his clients’ experience seriously, and it showed in the deliberate way he described his service.

Elias took us and about 15 other tourists, mostly Greek, on a beach-hopping tour of Milos’ southern coast on his 15-meter sailboat, “To Oneiro,” or The Dream.

First, we stopped at Gerakas, reachable only by boat. The cream-colored kaolin cliffs pour into a smooth, narrow strip of beach, and the beach’s shelter from the open sea makes swimming there a pleasure in gin-clear water.

We took about an hour there to frolic. If you decide to spend longer there, you have to be prepared for a lack of shade and a lack of amenities, other than peace and beauty.

We spent much of the day at Kleftiko, the southwestern point of the island where caves there were once used by pirates as hideaways, according to Elias and guidebooks.

Languid rock arches and other curious formations help create a dreamy, fantastical cove that, like Gerakas, has a narrow, pillowy strip of beach with opportunities for shade. You won’t be alone:

Tour boats come and go, each pulling up for an hour or two to take it all in. Elias even leads an entertaining, if unspectacular snorkeling jaunt.

Lunch was seafood in a red sauce over pasta ― prepared in the boat’s below-deck kitchen ― and the evening snack included cheese, olives and ouzo. Not bad.

Along the way and back, there are tiny beaches, caves and strange noses of rock ― not to mention mining operations that offload onto tankers that pull up next to the kaolin cliffs.

By the time Elias pulled the boat back into Paleohori, the sun was shedding a copper hue on the island, and a day in the sun and water left us drained and invigorated at the same time.

Milos: http://www.milos-island.com . About 100 miles off the coast of Athens.

Getting there: Fly to Athens, Milos, or the tourist island of Santorini. Ferries or boats sail to Milos from the mainland port of Piraeus (near Athens), Santorini and many other Greek islands. Check boat and ferry schedules at http://gtp.gr or http://danae.gr .

Flight schedules are at http://milostravel.com.