Paul Fontaine, vice president of education, has for years wanted to expand beyond the bricks and mortar. He got his wish this month with the launch of the Museum of Science Segway Experience, an outdoor tour of the area around the museum using the gyroscopic, two-wheel transporters, themselves a marvel of science.

“We have all this science and technology of the human world packed within a few miles of the museum,” Fontaine said. “This was just a natural extension of what we already do.”

The parks and shoreline around the building are full of native flora and fauna, and the museum is just down the street from the Massachusetts Institute of Technology in Cambridge, the birthplace of some of the nation’s greatest scientific achievements, Fontaine said. 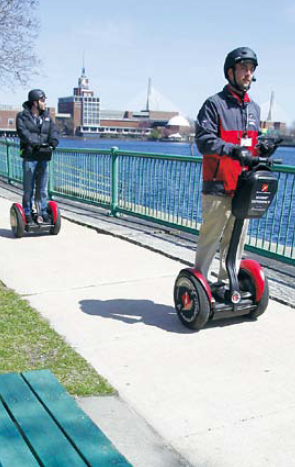 Museum of Science twowheel,gyroscopic, personal transporter tour guide Nick Rosato (right), of Boston escorts Waldo Holtzhausen on a tour route along the Charles River in Cambridge, Massachusetts, April 15.(AP-Yonhap News)
“There are a surprising number of different birds who make their habitat right in the city,” Fontaine said.

The museum bought a fleet of 30 Segways, each featuring bright red fenders and the museum’s logo on the wheel coverings. It plans on four tours of six people each per day at first, hopefully to increase as the weather improves and word gets out.

Employees have used Segways for years inside the museum as sort of mobile information kiosks, but this is the first time they are available to visitors.

The tour, $60 for museum members and $65 for nonmembers, has been in the works for about a year.

“It was a natural fit,” said Mary Beth Alosa of Segway of Boston, an authorized dealership. “They came to us and we said let’s put these two together and see how it’s received.”

The one-hour tour starts across the street from the museum at the North Point Park, where guides point out the plants and wildlife including geese, coots and red-tailed hawks.

He points out that much of the land in the area was marshy in colonial times and has been filled in. In fact, O’Brien said, the area of Cambridge known as Lechmere was once a marsh and is French for “sea of leeches.”

O’Brien carries another modern innovation, an iPad, to illustrate his talks with pictures and historical maps at stops along the way.

MIT was not involved in the planning, but the tour has the university’s blessing. The guides point out various places on campus, including the building that houses the cyclotron, the birthplace of nuclear medicine, and the I.M. Pei-designed Building 54.

The tour, of course, is intended to be fun too, and guides point out MIT’s famous dome, the site of many university pranks. Creative MIT students have in the past baffled the public by somehow putting a replica of the lunar module, a fire truck and even the TARDIS time machine from the British TV show “Dr. Who” on the dome.

The tour even points out American history, including the point where British troops disembarked from their boats after crossing Boston Harbor before the long march to the battles of Lexington and Concord.

And of course, the guides talk a little bit about the inner workings of the Segways, remarkably intuitive machines that appear to defy the normal rules of balance.

In fact, before the museum lets someone on a Segway, they have to take a half-hour training course.

“The No. 1 priority is always safety,” O’Brien said.

The tour probably will evolve as museum staff finds out what visitors like and dislike. But the ultimate goal is for visitors to enjoy themselves.