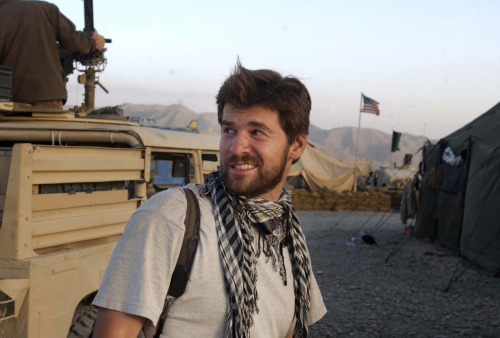 This undated photo provided by Getty Images shows Getty photographer Chris Hondros in Afghanistan. Hondros was critically injured while on assignment in Misrata, Libya, on Thursday, April 20, 2011. (AP-Yonhap News)
MISRATA, Libya (AP) _ Two Western photojournalists, including an Oscar-nominated film director, were killed Wednesday in the besieged city of Misrata while covering battles between rebels and Libyan government forces. Two others working alongside them were wounded.

British-born Tim Hetherington, co-director of the documentary ``Restrepo'' about U.S. soldiers on an outpost in Afghanistan, was killed inside the only rebel-held city in western Libya, said his U.S.-based publicist, Johanna Ramos Boyer. The city has come under weeks of relentless shelling by government troops. 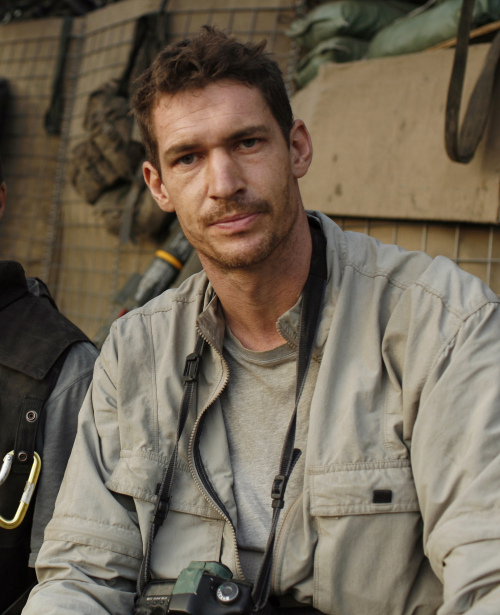 Tim Hetherington, is shown at the Restrepo outpost in the Korengal Valley, Afghanistan, during the filming of their documentary "Restrepo". Hetherington has been killed in Misrata Libya Wednesday April 20, 2011, while covering battles between rebels and Libyan government forces . Three other Western photographers were reported wounded. (AP-Yonhap News)

Chris Hondros, a New York-based photographer for Getty Images, was also killed. His work appeared in major magazines and newspapers around the world, and his awards include the Robert Capa Gold Medal, one of the highest prizes in war photography.

Many circumstances of the incident were unclear. A statement from Hetherington's family said he was killed by a rocket-propelled grenade.

The Washington Post reported that the journalists had gone with rebel fighters to Tripoli Street in the center of Misrata, scene of the some of the most intense recent fighting in the city.

After an ambulance rushed Hetherington and Martin to a triage tent, an American photographer whose bulletproof vest was splattered with blood implored the drivers to go back for more victims, the Post reported.

Hetherington was bleeding heavily from his leg and died about 15 minutes after he reached the triage facility, while Hondos died after suffering a severe brain injury from shrapnel, the Post reported.

The two other photographers _ Guy Martin, a Briton affiliated with the Panos photo agency, and Michael Christopher Brown _ were treated for shrapnel wounds, doctors said.

Libyan leader Moammar Gadhafi's forces have intensified their weekslong assault on Libya's third-largest city, firing tank shells and rockets into residential areas, according to witnesses and human rights groups. NATO commanders have admitted their airpower is limited in being able to protect civilians in a city _ the core mission of the international air campaign.

In Washington, the White House expressed sadness over the attack and called on Libya and other governments to take steps to protect journalists.

``Journalists across the globe risk their lives each day to keep us informed, demand accountability from world leaders and give a voice to those who would not otherwise be heard,'' press secretary Jay Carney said.

Hetherington, 40, was killed a day after he tweeted: ``In besieged Libyan city of Misrata. Indiscriminate shelling by Qaddafi forces. No sign of NATO.''

``Tim was in Libya to continue his ongoing multimedia project to highlight humanitarian issues during time of war and conflict,''

Hetherington's family said in a statement. ``He will be forever missed.''

Hetherington was nominated for an Academy Award for his 2010 documentary film ``Restrepo.'' The film was co-directed by Sebastian Junger, author of ``The Perfect Storm.''

``He was an amazing talent and special human being,'' Sundance Institute spokeswoman Brooks Addicott said in a statement. ``We send our sincere condolences to the Hetherington family, to Sebastian Junger and Daniela Petrova, and to Tim's many admirers all over the world.''

Hetherington was born in Liverpool and studied literature and photojournalism at Oxford University. Known for his gutsy ability to capture conflict zones on film, his credits included working as a cameraman on the documentaries ``Liberia: An Uncivil War'' and ``The Devil Came on Horseback.'' He also produced pieces for ABC News'

Hetherington's photos appeared in Vanity Fair magazine, where he worked as a contributing photographer. He won the World Press Photo of the Year award for his coverage of U.S. soldiers in Afghanistan's Korengal Valley.

``Restrepo'' tells the story of the 2nd Platoon of Battle Company in the 173rd Airborne Combat Team on its deployment in Afghanistan in 2007 and 2008. The title refers to the platoon outpost, named after a popular soldier, Juan Restrepo, who was killed early in the fighting.

``We're at war,'' Hetherington said in an interview with the AP before the Oscars. ``We wanted to bring the war into people's living room and put it into the movie theaters, and get people to connect with it. It's not necessarily about moral outrage. It's about trying to understand that we're at war and try to understand the emotional terrain of what being at war means.''

Hondros, 41, had covered conflict zones since the late 1990s, capturing clutching, jeering and fearful moments from wars including Kosovo, Iraq and Afghanistan. One front-page New York Times photo from 2007 showed a Humvee patrol in Iraq from a different angle: The ruddy hands of an Iraqi interpreter and a pair of muddied boots belonging to a gunner.

``He has an intimacy in his work,'' said Swayne Hall, a longtime friend who works as a photo editor with The Associated Press. ``Some people will use a long lens so they don't have to get up close. But Chris will get up close, he's just not afraid to be with whatever he's photographing.''

Former colleagues said Hondros had a good attitude, a great eye for detail and a personable nature.

``He is highly intelligent, and he knows the big picture of world events. And that helped him so much,'' said former boss Johnny Horne of the Fayetteville Observer, where Hondros worked from 1996 to 1998. ``Chris was able to make a connection with people.''

Paul Woolverton, a friend who was with the family in Fayetteville, North Carolina, said Hondros moved to New York City and saved his money working as a night editor for the AP in order to get overseas.

``He went to the city to pursue his dream, and he got it,'' Woolverton said.

Hondros was born in New York City and moved to Fayetteville as a child. He studied English literature at North Carolina State and got a master's degree at Ohio's School of Visual Communications. After working for the Observer and the AP, he freelanced and eventually became senior staff photographer at Getty.

``He quickly became the photographer who was just special, really special,'' Hall said. ``Our friends would always talk about the fact that he had such a big fun personality, and the skills.''

Hondros was planning to be married this summer to a former photo editor-turned attorney, Christina Piaia. He is survived by a brother, Dean and his mother, Inge.

The bodies of Hondros and Hetherington were to be shipped out on the Ionian Spirit, a passenger ferry that had just delivered food and medical supplies to Misrata, said Human Rights Watch spokeswoman Emma Daly.

Two other journalists have been killed in the Libyan conflict, according to the New York-based Committee to Protect Journalists. An unknown gunman killed Mohammed al-Nabbous, founder of the online Libya Al-Hurra TV, in the rebel stronghold of Benghazi on March 19.

Cameraman Ali Hassan al-Jaber was shot when his Al-Jazeera crew was ambushed near Benghazi on March 13.