JAKARTA (AP) ― The skeleton of what will soon be one of the world’s biggest nuclear plants is slowly taking shape along China’s southeastern coast ― right on the doorstep of Hong Kong’s bustling metropolis. Three other facilities nearby are up and running or under construction.

Like Japan’s Fukushima Daiichi plant they lie within a few hundred miles of the type of fault known to unleash the largest tsunami-spawning earthquakes.

Called subduction zones, these happen when one tectonic plate is lodged beneath another. And because the so-called Manila Trench hasn’t been the source of a huge quake in at least 440 years, some experts say tremendous stresses are building, increasing the chances of a major rupture.

Should that happen, the four plants in southern China, and a fifth perched on Taiwan’s southern tip, could be in the path of a towering wave like the one that struck Fukushima.

“We have to assume they’ll be hit,” said David Yuen, a University of Minnesota professor who has modeled seismic probabilities for the fault. “Maybe not in the next 10 years, but in 50 or 100 years.”

Asia, the world’s most seismically charged region, is undergoing a nuclear renaissance as it struggles to harness enough power for its huge populations and booming economies.

But China, Taiwan, India and several other countries frantically building coastal facilities have made little use of new science to determine whether these areas are safe. At least 32 plants in operation or under construction in Asia are at risk of one day being hit by a tsunami, nuclear experts and geologists warn.

And even when nations have conducted appropriate seismic hazard assessments, in many cases they have not shared the findings with the U.N. International Atomic Energy Agency, leaving experts frustrated and in the dark.

“It’s pretty astonishing to a lot of us that so little priority is placed on the work we do,” said Kerry Sieh of the Earth Observatory of Singapore, who has studied and written about the Manila Trench, where pressure has been building for millions of years.

He is among those who say it is only a matter of time before it snaps. 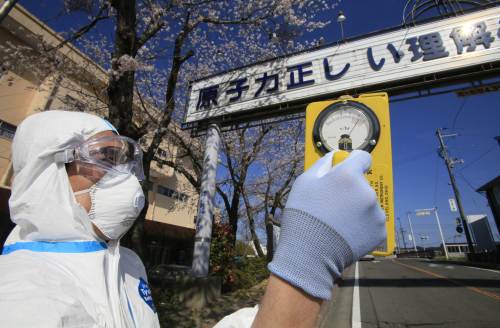 A man in a radiation-proof suit checks radiation level at Futaba town, Fukushima prefecture, within 10 kilometers of the stricken Tokyo Electric Power Co. Fukushima nuclear power plant. (AFP-Yonhap News)
In assessing the tsunami risks to nuclear power stations, scientists focus on their proximity to subduction faults, volcanoes and areas frequently hit by underwater landslides ― all of which can trigger seismic waves. Because giant tsunamis recur, they also look at historic and scientific records, going back up to 4,000 years if possible.

The greatest threat comes from the subduction faults crisscrossing the globe, some far from the minds of policymakers, nuclear industry officials and the public because it has been so long since they exploded.

In places where tectonic plates that form these faults are “coupled,” or stuck together, the stresses are the biggest, especially if centuries have passed without a major energy-releasing earthquake.

When the strain eventually forces one plate to pop up or dive under the other, the resulting temblor can spawn mammoth waves like the one that struck off Japan’s northeast coast on March 11, triggering the nuclear crisis that has carried on for more than a month.

While there is some “coupling” at the Manila Trench, there is debate about just how much. Scientists say more research needs to be done to determine if pressure is building and along which segments.

A computerized simulation by Yuen’s students shows a magnitude-9.0 quake along the Manila Trench sending waves racing along the South China Sea, before slamming Taiwan’s southern shore 15 minutes later. The tsunami reaches China’s southeast coast in around two hours. It also strikes Hong Kong, which sits just 30 miles from the nearest nuclear plant ― close enough to see increased radiation levels if a plant were to be damaged by a Fukushima-like event.

Scientists paint a worst-case scenario in which waves 5 to 8 meters could strike the plants in China and Taiwan.

Science has come a long way since the first nuclear plant was built in the 1950s.

By carbon dating the ash, pollen or other organic material attached to tsunami sand deposits swept inland with the giant walls of water, geologists can determine to the decade, and sometimes even the year, when the wave hit and how big it was when it roared ashore.

That’s important because some tsunamis only strike once a millennium.

“This is the smoking gun, the calling card of the tsunami, and when you find it, especially far inland, you know that this is an area that has been hit with a large tsunami in the past,” said Bruce Jaffe, an oceanographer and tsunami expert at the U.S. Geological Survey.

Such research is considered essential in deciding where to locate nuclear power stations because most are built along seashores, rivers and lakes to supply the massive amounts of water needed to keep their reactors from overheating. Even plants perched on hills or cliffs may be in danger because the pipes used to carry up water used for cooling could be damaged in a powerful tsunami.

Japan, which sits atop three highly active tectonic plates with

54 reactors dotting its coastlines, has probably done the most when it comes to looking back in history.

Even so, Tokyo Electric Power Co., which runs the hobbled Fukushima plant, did not factor geologic evidence of the giant Jogan tsunami of 869 A.D. into its preparedness. When the tsunami hit last month, it unleashed waves up to 14 meters high, swamping the backup generators needed for cooling.

The same region was also walloped twice before, once around 140 B.C. and again sometime between 600 B.C. and 900 B.C., scientific studies revealed.

Experts hope Japan has taught the world an important lesson: When it comes to nuclear safety, it’s essential to imagine the unimaginable. Looking back 50 years, or even 500, is not enough.

“When you’re talking about radioactivity and possibilities of explosions ... you have to look at what is within the realm of possibility,” said Jody Bourgeois, a tsunami expert at the University of Washington who was doing research in Japan when the disaster struck. “You should be building it with factors of safety for the maximum possible events.”

It’s not the first time a tsunami has threatened nuclear reactors.

The 2004 earthquake off Indonesia’s subduction fault spawned the monster tsunami that killed 230,000 people in a dozen nations.

It also sent waves slamming into a nuclear plant in the southern Indian township of Kalpakkam, the country’s center of atomic research, nearly a thousand miles from the quake’s epicenter.

Though the reactors automatically shut down and no radioactive material was released, it showed that even facilities far from dangerous faults need to prepare for the worst.

While the near miss in India raised awareness, it did not prompt major changes to the safety design at the Madras Atomic Power Station, said its director, K. Ramamurthy. Last week, however, a top government official said India would revamp the safety features at all its nuclear plants to try to prevent a Japan-style crisis.

The Madras plant is among the scores that have yet to ask the IAEA for an independent review to determine if their tsunami preparedness assessments meet international standards.

The same holds for Pakistan, which built a plant along a coastline near Karachi that was hit by a tsunami in 1945, as well as for China, Taiwan and the U.S.

Though the reports aren’t mandatory, Antonio Godoy, the IAEA’s recently retired top seismic safety expert, said many countries have held up efforts to build a comprehensive database identifying the plants vulnerable to tsunamis based on such reviews.

The Fukushima crisis does seem to have jolted some governments into action.

Tsunami expert Tso-Ren Wu of Taiwan’s National Central University, warns that “we are long overdue” for a similar quake on the Manila Trench. He was recently commissioned by Taiwan to model worst-case scenarios for all three of the island’s nuclear plants and a fourth under construction. His findings will be used to help redesign the facilities or raise their seawalls, if necessary.

His studies indicate two plates that form the subduction zone are pushing against each other at a relatively fast 8.7 centimeters per year, forcing extreme amounts of energy to build up. A fault slip from the two plates would be up to 38 meters, comparable to what occurred during the 1960 magnitude-9.5 Chile earthquake, the largest on record. By comparison, the slips in Indonesia and Japan were estimated at around 20 meters. The greater the slip, the more water is heaved up to create bigger tsunami waves.

It’s not yet clear, however, if the Japan disaster was a wake-up call for energy-starved China, which has the world’s most ambitious nuclear power expansion.

China’s nuclear regulators declined to answer questions submitted by The Associated Press, but have said in the past that plants along their southeastern coast have been fitted with the most modern technology and are able to withstand huge storm surges from typhoons, which hit with far less force than tsunamis.

As for the likelihood of a mammoth tsunami, Li Zhong-Cheng of the National Energy Center told the state-run China Daily newspaper after last month’s disaster that coastal areas are protected by a wide, shallow continental shelf that is not conducive to the formation of big seismically triggered waves.

Other scientists say there isn’t enough research to make such a declaration.

Some historical records, though inconsistent, indicate a 10-meter tsunami in 1782 from the South China Sea killed as many as 40,000 people after hitting southern Taiwan. Records also point to a 27-foot wave in 1765 that swept as many as 10,000 people out to sea in the same province where the Chinese plants are located.

But experts say China needs to look much further back in time.

Unlike Japan, sand deposit studies have just begun there and have not yet yielded evidence of ancient tsunamis. More research is needed along the coast and in the Philippines ― which would have been within reach of the same waves.

If that data, along with predictions about future earthquake-spawned tsunamis are not taken into account, some fear disaster could strike again some day.

Plants in the Mediterranean and along the Atlantic and Persian Gulf also need to be prepared.

The only candidate for a large tsunami in the continental U.S. is the Cascadian subduction zone, more than 200 miles off the West coast. Experts say neither the Diablo Canyon nor San Onofre stations in California are considered in the path of destruction, though they may still be vulnerable to local tsunamis generated by other faults or submarine landslides. Both have recently promised to carry out more advanced seismic testing to guarantee safety.

“What happened in Japan was not a surprise,” said Godoy, who remains an IAEA consultant and has spent much of the past 20 years warning governments to prepare for worst-case scenarios. “Maybe now they’ll wake up, listen and act.”