[ The Korea Herald – Send E-mail ]
Bad bank may absorb toxic loans
By 김연세
Published : Apr 18, 2011 - 19:47
Updated : Apr 18, 2011 - 19:50
The financial industry is expected to set up a bad bank which would specialize in disposing of toxic assets held by financial companies, amid a soaring number of bad loans caused by the prolonged property marker slump.

Financial regulators reportedly called for chiefs of five major financial groups to take the initiative in dealing with bad assets in the market by holding a meeting Monday.

Though the Financial Services Commission officially downplayed the possibility of forming a bad bank in the near future, the issue has seemingly been seriously discussed among officials in the Financial Supervisory Service, an executive arm of the FSC.

“In a bid to dissolve soured project financing-related loans to builders in the construction sector and help banks issue further support, we are considering setting up a bad bank,” an FSS official said.

The possibility of a bad bank emerging could be seen from remarks in the urgent meeting among FSC Chairman Kim Seok-dong, FSS Governor Kwon Hyouk-se and chiefs of five financial groups.

“Financial groups play a significant role in leading the industrial sector and the financial market,” Kim said. “And recently a concern has been raised over whether they provide appropriate and effective financial support to economic activities.” 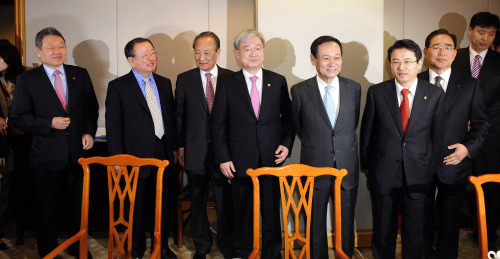 A senior FSS official who attended the meeting, said the five leading banking groups will mainly chip in money to the bad bank, if established.

FSS officials expect the debt clearing entity could be set up before the third quarter of the year. “A private bad bank will help cleanse their balance sheets more quickly, as the state-run Korea Asset Management Corp. alone may not be able to absorb all the troubled assets,” an FSS official said.

In addition, Kwon reportedly called for leaders of the five financial groups to take interest in establishing the bad bank.

The scheme came as savings banks and other secondary banking financial companies suffered a massive increase on their defaulted construction PF loans.

At the end of 2010, the financial sector had a total of 9.7 trillion won ($8.9 billion) in soured PF loans, nearly tripling from 3.4 trillion won a year earlier.

But the FSC dismissed the alleged agreement among the participants, saying, “Concerning the bad bank, no details have been discussed during the meeting.”

The FSC takes the stance that more sufficient talks with the private sector as well as the FSS on establishing a bad bank are necessary.

Meanwhile, Kim and Kwon, the nation’s two chief financial regulators, expressed their uneasiness about cyber security systems of the financial industry amid the recent security lapses in Hyundai Capital and Nonghyup.

Kim stressed that financial companies have been negligent in establishing firm security systems for their electronic transaction services.

Kwon shared Kim’s view, citing the situation under which banks and other financial companies tend to gloss over the IT security sector.

They called on the financial group leaders to increase their budget on the cyber security to block hackers’ attack.

“It is regrettable that a financial company ― which operates businesses on the basis of customer confidence ― saw its network systems break down,” Kim said.