“It had never even occurred to me that this could happen. I had heard that outside India this happens to other people’s kids but I never thought it would happen to my own,” the 38-year-old from Mumbai told AFP.

Sujata’s children are not exceptional cases, even in a country more traditionally associated with malnourishment and chronic food shortages than overeating and weight-related illness.

India still struggles to feed all of its 1.2 billion population but childhood obesity and diabetes have become an increasing problem among the middle classes, who have largely benefited from a decade of rapid economic growth.

“Childhood obesity has definitely increased in the last couple of years,” said Dr Paula Goel, from the Fayth Clinic in Mumbai, which runs a weight loss program for adolescents.

“This is mainly because ... they’re not playing on the fields and they’re spending so much time on sedentary activities that come with the affluent lifestyle.

“Visiting the malls over the weekends, eating junk food, it’s bound to cause obesity.”

At 12 years old, Sujata’s youngest son, Saiprasad, watches three hours of television every day and weighs 66 kilograms when he should be between 52 and 58kg. 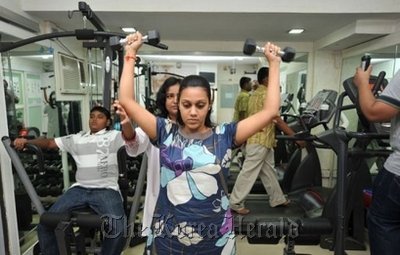 India still struggles to feed all of its 1.2 billion population but childhood obesity and diabetes have become an increasing problem among the middle classes, who have largely benefited from a decade of rapid economic growth. (AFP-Yonhap News)
Her eldest boy, Sairaj, 15, tips the scales at 89 kilograms ― more than 30kg overweight.

Both boys love eating oil-rich and fast food and are on medication to control their sugar levels. They have been attending Goel’s clinic for the last three months.

Anoop Misra, president of the Center for Diabetes, Obesity and Cholesterol Disorders in New Delhi, says India has the highest number of diabetics in the world at just under 51 million people.

But that number could increase by nearly 150 percent in the next 20 years, he warned.

The high number of cases among South Asian people has been attributed to genetic factors, including a predisposition to storing more fat.

Socio-environmental factors, though, are now seen as playing an increasing role in the rising number of cases of Type 2 diabetes.

The condition, which occurs when the body cannot effectively use the insulin it makes, largely as a result of excess body weight and physical inactivity, was previously seen mainly in older people.

“All over the world, except India, people love bland, less spicy food,” said Himank Doshi, a medical student tucking into a takeaway from a stall on Mumbai’s Chowpatty Beach.

“They love the boiled food and all for the nutrition. But Indian people are less concerned about nutrition. They first focus on the spice of the food, the taste.”

That mindset, plus a decline in physical activity through increased car use and a lack of open spaces for exercise, is a dangerous combination.

A study of 4,000 Indian children in 15 cities published in August last year indicated that almost a quarter of 5 to 14 year olds in urban schools were overweight, while nearly 11 percent were obese.

Many of Goel’s young patients already have mild depression because of their size.

The stakes are high ― and not just for the nation’s health: India spent about $40 billion on treating diabetes last year.

For Misra, prevention ― from better health education to weight-loss clinics ― is more cost-effective.

“If we prevent one case we’ll be saving so much more money, rather than treating this for the lifetime,” he added.

“So for a developing economy like India, it makes 100 percent sense to prevent something rather than treating it with expensive insulin and so on.”

Sujata realizes that life in modern India is partly to blame for her children’s predicament ― and that change isn’t always for the better.

“If you look at the previous generation we never went out to eat, we just ate home food. Everything was made at home. Now there’s more money and more illness because we’ve started to eat out more,” she said.