Certain desserts hearken back to the hearth.

One bite stirs up childhood memories, like the cream cheese frosting over a slab of carrot cake, or that moist, dense crumb off a freshly-baked wedge of banana bread that mom packed for school.

“I went for what I ate often,” Holly Sorim Yang, owner of The Cheesecake, explained why she put carrot cake, banana bread and other retro confections on her menu. 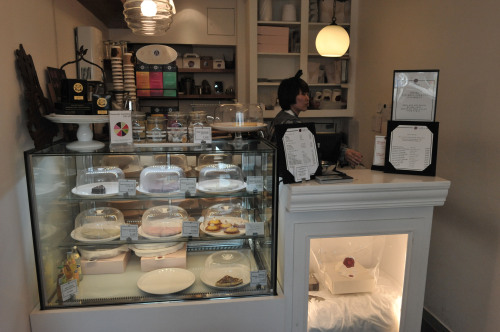 The Cheesecake in Dongbuichon-dong serves up zucchini, banana, carrot and apple-and-nut riffs off the retro classic as imagined by owner Holly Sorim Yang. (Chung Hee-cho/The Korea Herald)
Hailing from the States, the 27-year-old probably honed her sweet-tooth on these old-school desserts shortly after their heyday in the 1960s and ‘70s.

Having developed a fondness for such Anglo-American (and also Canadian) treats, she decided to bring their homespun vibe to her gem of a shop in Seoul’s picturesque Dongbuichon-dong.

At first she only served zucchini, banana and apple-and-nut variations alongside her other cakes. Then, one day a customer requested carrot. Yang gladly obliged and added a frosting-free version to the line-up.

“I use organic whole wheat flour,” Yang explained why her creations take on a nut brown hue.

She heaps on the grated zucchini and slivers of apple, letting the fruit do double duty as a natural sweetener and source of moisture, while reducing the amount of flour and sugar as much as possible.

Cinnamon and nuts layer Yang’s concoctions with fragrance and texture. Juicy prunes dot her apple cake, which is soft and heavy but not too rich.

Simple, straightforward and baked into large rounds that yield multiple slices, her sweets feel like they are meant to feed whole families. 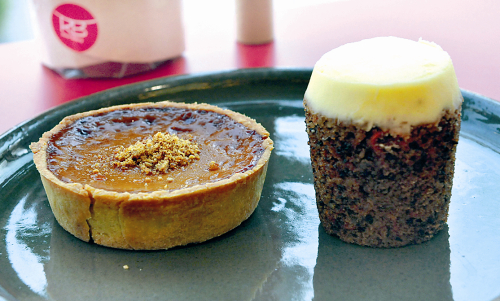 Rose Bakery’s single-serving-sized carrot cake (right) hews to the wholesome yet no-holds-barred aesthetic of the quaint Seoul shop with its decadent cream cheese frosting and organic vibe, garnering more popularity than the brand’s toothsome caramel tart (left).
Shaped like a small cylinder and capped with a decadent, thick, cream cheese-frosting, it is easy to see why pastry chef Rose Carrarini called her version “a number one best-seller” in her 2006 cookbook “Breakfast, Lunch, Tea” (Phaidon Press Limited, London).

Carrarini opened the Rose Bakery in Paris with her husband in 2002. The couple delighted Parisian palates with their Anglo-French fare. Success led to expansion, with a store opening up in London first and then in Seoul in 2010.

Na Hoon-young, owner of the Korean branch, explained the philosophy behind their no-frills food in three words ― “simple, natural, and high quality.”

“We have no storage refrigerators,” he expounded upon the freshness of their goods. “We make it the day of, eat it the day of and then discard any leftovers.”

Behind the counter, a huge basket full of earth-covered carrots, glinting orange from under their coat of dirt, testify to the land-to-mouth concept of the place.

The carrots will be washed, prepared and mixed with butter, cinnamon, minute bits of walnut and other ingredients to create the bakery’s delicious dessert.

Banana pound cake is also a fixture of the menu, served up thick, glazed and slightly grainy.

Opting for a minimal approach to the classic, Amandier eschews glaze and frosting for their banana and wholemeal carrot muffins. Helmed by executive pastry chef Ruben Jan Adriaan, the Anguk-dong cafe originally aimed for a classic French vibe, according to sous chef Louis Heng, until customers asked for muffins.

Heng revealed the secret to their carrot muffin’s mind-boggling softness. The carrot is soaked in milk in advance.

Rich with spices, Amandier’s take on the timeless dessert is a perfect breakfast pick-me-up, great sliced in half and sandwiched around nubs of butter or by itself, with a hot cup of coffee.