Korean men spend the least amount of time doing housework in the OECD.

The 2011 edition of “Society at a glance ―- OECD Social Indicators” indicated that Southern European and Asian men were least likely to participate in household chores.

The Organization for Economic Cooperation and Development conducted a survey on 29 countries to see how much time people devoted to unpaid work. Unpaid work was defined as the production of goods and services not sold on the market such as cooking, gardening and cleaning.

Asian men, especially those from India, Japan, and South Korea spent the least amount of time ― less than an hour a day ― doing unpaid work. American men, on the contrary, spent around three hours a day doing household chores apart from their regular work. 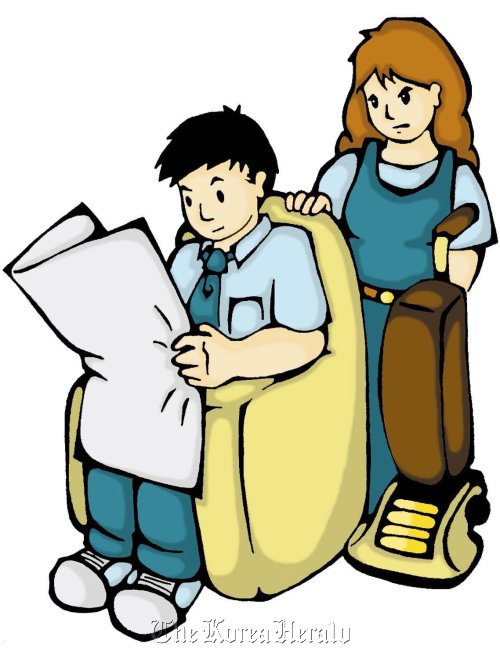 The study showed part of the reason for women’s higher share of unpaid work was their shorter time in paid work. Countries with high levels of female paid employment had a more equal gender division of total working time. Norway, which is well known for strong gender equality policies, had the lowest female unpaid working time.

Other unpaid work such as child care was low for Korea, Belgium and Hungary. Total time devoted to child care occupied less than one hour per day, the lowest among all OECD countries, whereas Anglophone countries ranked the highest.

Unpaid work not only contributes to household consumption but also to future well-being and to community well-being, the study said.

Veerle Miranda, the study’s author, said unpaid work is an “unglamorous way of contributing to the economy.”

“If unpaid work were remunerated, it could equal to one-third of the average GDP in OECD countries,” she said.

In the worldwide league of kindness, Koreans ranked below average, a OECD report showed.

The report revealed that about 35 percent of Koreans showed kindness recently, slightly behind the OECD average at 39 percent.

Of the 34 OECD member countries, Korea came 21st in the pro- and anti-social behavior index, 2010, followed by Mexico, France and Japan. Japan came 28th at 26 percent.

The survey, based on the Gallup World Poll, asked people in over 140 countries if they had volunteered, donated money to a charity or helped a stranger recently.

About 60 percent of people in the U.S. and Ireland said they helped someone, ranking first and second in the index, followed by Australia, New Zealand and the U.K.

The report concluded that those in higher income countries are more likely to help others as northern European countries showed a high percentage for pro-social behavior.

Under the five indexes, Korean ranked below the OECD average in “social trust” at 26th, “confidence in national institutions” at 21st, “voting” at last and “tolerance” at 28th. Korea showed the lowest voting rate among OECD countries at 46 percent, just behind the United States at 48 percent.