Google Korea is currently considered a leader in mobile advertising business, moving ahead with its global platform, followed by the country’s telecoms ― SK Telecom, LG Uplus and KT ― which all declared to play a role in the market.

According to the Korea Communications Commission, the mobile advertising industry in Korea is expected to grow to $350 million this year, a 25-percent growth from $280 million in 2010. It is also projected to jump to $450 million in 2012, the state media regulator said.

In a press conference at its headquarters in southern Seoul, Google Korea introduced reporters to its global platform AdMob, claiming that now is the time for firms to jump into mobile advertising.

“On a small screen, you can’t pass by the ads or not see them,” said Lee Won-jin, managing director for Japan and Asia Pacific at Google. “There’s not that much time left until the mobile advertising market fully blossoms after reaching its peak point.”

Mobile advertising is a rising form of media for it can target a large group or even tailor it to a specific group, while minimizing the costs for the advertisers. It can also display the ads at any time since people could connect themselves to the Internet not only with desktops but also with smartphones and other wireless electronic devices.

What Lee is pointing to as the peak point is that 40 percent of Korean people will become smartphone owners when the related figure amounts to 20 million this year. This is based on the fact that the online advertisement became widely popular when the number of Internet subscribers reached 20 million, according to Lee. 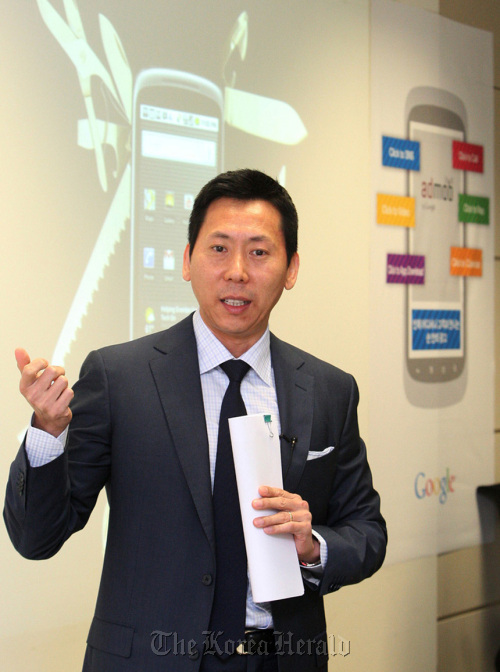 Lee Won-jin, managing director for Japan and Asia Pacific at Google, speaks during a press conference on mobile advertising at the company’s office in southern Seoul on Tuesday. (Google Korea)
“Even now, 69 percent of smartphone owners are heavy users of the device, playing with it at least for an hour every day,” he said, referring to a recent survey. “Six percent of the smartphone users say they don’t have a computer at home and 35 percent of them connect themselves more to mobile Internet when they’re home rather than watching television.”

As a result, the global search giant released what it calls a “premium network” platform that enables publishing the ads on more than 50,000 local and international mobile applications.

Advertisers could also display banners on certain Web pages or apps and have the consumers visit the company’s app with a single click. The single click could also link the people to the firm’s pages or accounts on social networking sites like Facebook and Twitter.

“This is a global platform which was built with a lot of investment,” said Lee. The global company also held an event which invited local app developers to explain the details of the platform.

LG Uplus also announced it would serve as the first mobile carrier to take part in the mobile advertising business earlier in October by putting forward a platform called “Uplus AD.”

Since introducing the platform, it has secured a total of 150 advertisers and put out 400 different mobile applications that could place the ads, said an LG Uplus official, adding that it expects to increase the number of apps to 600 by this year.

“I would say the structure of the plan is somewhat similar to Google’s, however, we could feature an improved marketing tactic for the ads by further narrowing down the categories ― such as age group, sex and other characteristics ― since we already have subscriber information,” he said.

Another difference between the two firms is that LG Uplus takes 10 percent of the revenue, while Google takes about 40 percent.

In the meantime, SK Telecom, the country’s leading telecom, is projected to open its own mobile advertising platform dubbed “T AD” by the first half of this year, a company official said.

“We tested a closed beta system before testing the open beta system beginning in late March to reduce the advertisers’ concerns involving the system,” the official said. “It will be up and ready by June.”

KT is also currently preparing a test service for its platform “Olleh AD,” with plans for the launch in the first half of this year.

It hosted an event at its office in downtown Seoul on Feb. 24, explaining its project vision and specifics of the mobile advertising scheme.

The company added that it will make use of its affiliated media labs ― nasmedia and KT mhows ― to form networks with its advertisers.