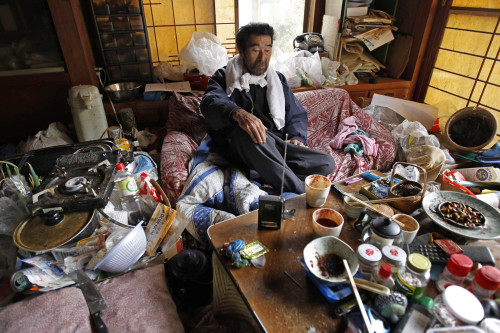 (Kunio Shiga listens to a battery-powered radio in the living room of his home in Minami Soma, Fukushima Prefecture, inside the deserted evacuation zone established for the 20 kilometer radius around the Fukushima Dai-ichi nuclear complex in northeastern Japan Friday, April 8, 2011. The 75-year-old man was stranded alone in his farmhouse ever since Japan's monstrous tsunami struck nearly a month ago. / AP-Yonhap News)

MINAMI SOMA, Japan (AP) _ The farmhouse sits at the end of a mud-caked, one-lane road strewn with toppled trees, the decaying carcasses of dead pigs and large debris deposited by the March 11 tsunami.

Stranded alone inside the unheated, dark home is 75-year-old Kunio Shiga. He cannot walk very far and doesn't know what happened to his wife.

His neighbors have all left because the area is 12 miles (20 kilometers) from the crippled Fukushima Dai-ichi nuclear plant -- just within the zone where authorities have told everyone to get out because of concerns about leaking radiation.

No rescuer ever came for him.

When a reporter and two photographers from The Associated Press arrived at Shiga's doorstep Friday, the scared and disoriented farmer said: ``You are the first people I have spoken to'' since the earthquake and tsunami.

Shiga gratefully accepted the one-liter bottle of water and sack of 15-20 energy bars given to him by the AP. With Shiga's permission, the AP notified local police of his situation.

On Saturday, a police official in charge of missing persons called the AP to say Shiga had been rescued and taken to a shelter.

The official, who did not give his name because he is not authorized to speak to the media, said Shiga was expected to be fine.

Shiga had said Friday that he was running out of supplies and food. He was unable to cook his rice for lack of electricity and running water. His traditional, two-story house is intact, although it is a mess of fallen objects, including a toppled Buddhist shrine.

Temperatures at night in the region have been cold, but above freezing.

The Odaka neighborhood where he lives is a ghost town.

Neighboring fields are still inundated from the tsunami. The smell of the sea is everywhere. The only noise comes from pigs foraging for food.

Local police acknowledged they have not been able to check many neighborhoods because of radiation concerns.

As radiation from the Fukushima nuclear plant has fallen in recent days, however, the police have fanned out inside the evacuation zone to cover more areas.

On Friday, they were busy searching for bodies two miles (three kilometers) from Shiga's farmhouse.

Hundreds of police, many mobilized from Tokyo and wearing white radiation suits, pulled four bodies in an hour from one small area in Minami Soma. They had found only five bodies the previous day.

The AP crew, which had been watching the police search, later broke away to see if it could find any residents living inside the evacuation zone. Some construction workers directed them to a part of town where some houses were intact.

The farmhouse where Shiga's family has grown vegetables for generations is at the end of a long mud- and rubble-covered road blocked by fallen trees and dead and decaying animals.

The journalists spotted the relatively undamaged house about 500 yards (meters) away. Unable to drive on the road because of the debris, they navigated the rest of the way on foot, sometimes crawling over large branches.

Shiga was seen wandering in front of his house but went inside.

The journalists went to greet him.

He said he spent his lonely days since the disaster sitting in bed in his dark home and listening to a battery-powered radio. A scruffy beard covered his face.

``The tsunami came right up to my doorstep,'' he said. ``I don't know what happened to my wife. She was here, but now she's gone.''

Shiga said he was aware of the evacuation order but could do nothing about it, since he is barely able to walk past the front gate of his house. His car is stuck in mud and won't start.

Although Shiga moved to a shelter, he had said Friday that he was not sure whether he really wanted to.

``I'm old and I don't know if I could leave here. Who would take care of me?'' he said, staring blankly through his sliding glass doors at the mess in his yard.

Tokyo News Editor Eric Talmadge, along with photographers David Guttenfelder and Hiro Komae, were reporting from the evacuation zone of Fukushima Prefecture in northeastern Japan. 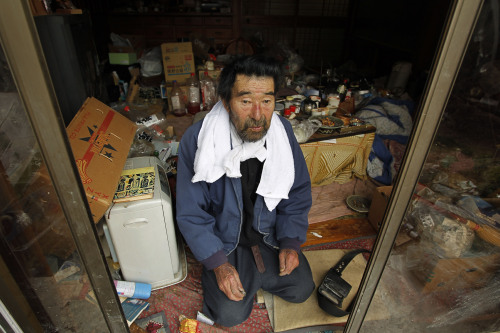 (Kunio Shiga poses for a photo at his home in Minami Soma, Fukushima Prefecture, inside the deserted evacuation zone established for the 20 kilometer radius around the Fukushima Dai-ichi nuclear complex in northeastern Japan Friday, April 8, 2011. / AP-Yonhap News)
<한글 요약>