In a perfect world, picnic-goers would wake up early in the morning to pack hampers full of freshly baked homemade goods.

Come weekend, the overworked and exhausted may groan when faced with such a daunting feat yet still want a tasty spread for the great outdoors.

Enter the grab-and-go feast as dreamed up by catering veterans who have mastered the art of the packed meal.

Venues famed for their stylishly wrapped take-out ― Ongkasomsi, Dorothy Table, and Under the Tree, Park ― were launched by owners who gleaned know-how through years of experience in making food for social events. 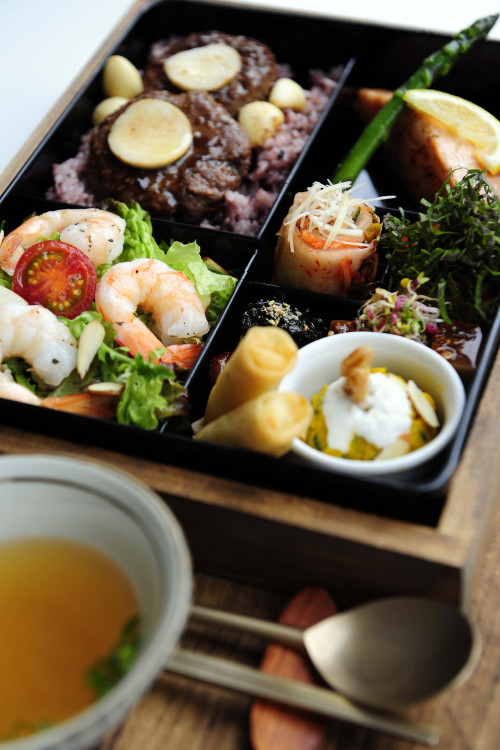 Last year, the trio opened a deli-style store in Sinsa-dong due to demand from regulars eager to custom-make carryout and check out the selection of sandwiches, onigiri (rice balls), salads and assorted nibbles on display. 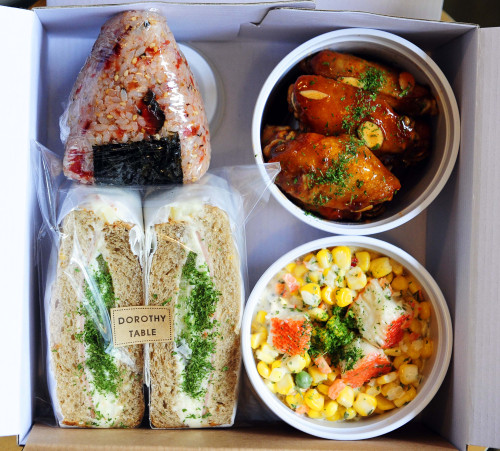 Amongst the staggering array of options, the corn and crab salad (3,500 won) and the potato ham sandwich (4,200 won) stood out.

Dressed in a mayonnaise-based sauce and flecked with parsley, generous chunks of crustacean and plump kernels of corn were cool and sweet.

“This is a childhood classic,” Park waxed nostalgic about their potato ham sandwiches, where starchy potato salad is blanketed with ham and then wedged in between two soft slices of wheat bread.

At neighboring take-out spot Under the Tree, Park chef Lee Jeong-sang and team also send diners on a trip down memory lane with the Park plate (8,000 won). 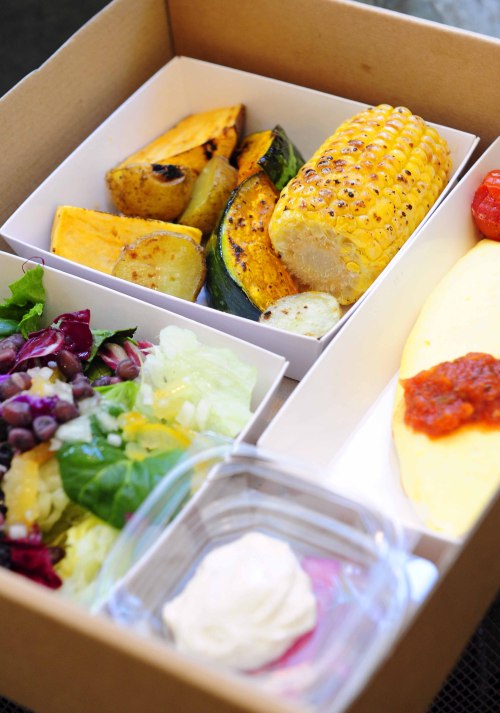 The Park plate from Under the Tree, Park brings the barbecue without the hassle — buttered, grilled corn-on-the-cob, sweet potatoes, kabocha squash, cherry tomatoes,baby potatoes come with an omelet, salad and a sour cream-based dip.

Buttered, grilled corn-on-the-cob, sweet potatoes, kabocha squash, cherry tomatoes and roasted baby potatoes dished out with a sour cream-based dip bring the barbecue to the table without the hassle.

A creamy omelet topped with spicy tomato sauce and a salad drizzled with yuja dressing complete the portable meal.

Lee ― who, like the establishment’s owners, has catering experience ― said that their packed fare business started to take off a few months after they opened, when boxed meal orders put in by celebrity fan clubs attracted notice.

Though they had not originally intended to focus on the pick-up-and-go aspect of their business, customers have been getting their rice plates and other options cooked up fresh and done up in a neat box with handles.

“Now I think we sell a greater ratio of take-out meals to other items,” said Lee.

The beautifully plated tray of goodies that sells in-house for 13,000 won and 15,000 won when ordered as take-away starts rapidly disappearing during the lunch hour.

“The set sells out everyday,” said Ong who only prepares a limited amount. “We only make enough for 32 people.”

For more bang for the buck, order the 15,000 won lunch. This week, it comes with rice topped with spicy stir-fried pork. Ong says that next week they will be serving japchae (stir-fried glass noodles with vegetables) over rice with pork sirloin.

Picnic-goers looking for a decadent spread can try the 35,000 won set. Moist and tender Korean-style hamburger steaks are laid over rice. A huge, succulent hunk of pan-fried smoked salmon accompanies the meal.

Julienned perilla leaves accent two squares of deep-fried tofu that have been crowned with stir-fried kimchi and dressed with a sauce made from balsamic vinegar and doenjang (fermented soybean paste).

Under the Tree, Park