The announcement by the Ministry for Food, Agriculture, Forestry and Fisheries came after soaring costs for food helped send growth in consumer prices to a 29-month on-year high of 4.7 percent in March.

The ministry said it will focus on controlling prices of 11 products, such as rice, cabbage, garlic, pork, chicken, apples and fish products like saury, pollack and squid, at an economic policymakers meeting chaired earlier in the day by President Lee Myung-bak.

“Prices of rice have jumped a record 11 percent from last year’s harvest time, requiring the release of government-held reserves,” said Lee Sang-kil, the deputy minister in charge of the food industry.

He said about 100,000 tons of last year’s rice held by the government may be released on the market as well as rice harvested in 2009.

The government also will release apples and garlic it has retained to stabilize prices and will lower import tariffs on pork.

Over 3 million pigs have been destroyed since the outbreak of foot-and-mouth disease in late November. The disease has caused pork prices to go up, he said. Duties will be lowered for live chickens as well as pollack and saury, Lee said. 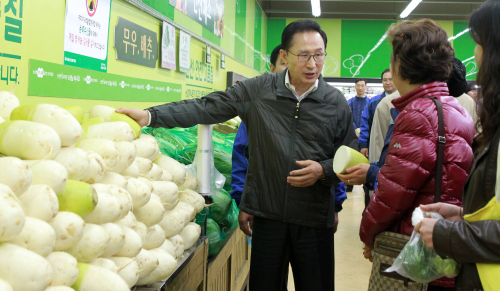 President Lee Myung-bak talks to a shopper about rising prices of farm and fishery products at the Hanaro Club in Seoul on Thursday. (Yonhap News)
As part of efforts to secure grains overseas, the government will push ahead with a plan for the state-run Korea Agro-Fisheries Trade Corp. in collaboration with private firms to set up a U.S. unit in the April-June period.

The company aims to handle 4 million tons of grain imported to Korea by 2015 out of over 20 million tons that the country needs on a yearly basis.

The ministry said the nation’s 85 livestock markets will resume operations Friday after 129 days of closures since the first outbreak of foot-and-mouth disease was reported in late November.

On April 3, the government lifted restrictions throughout the nation on the movement of livestock, which were put in place to contain the spread of the disease, it said.

The government on March 24 lowered the alert-level for foot and mouth disease by one notch to “warning” from “serious,” the highest level, according to the ministry.

Korea has destroyed and buried 3.5 million animals, mostly pigs and cattle, because of foot-and-mouth in the biggest cull in its history, since late November, contributing to gains in local food prices.

Meanwhile, the number of pigs raised in Korea plunged due to the massive slaughter of livestock, according to the report by Statistics Korea.

The number of pigs raised here came to 7.04 million during the first quarter, down 2.85 million or 28.8 percent from the fourth quarter of last year.

The figure, which is based on a livestock tally on March 1, is the lowest level since the third quarter of 1997, when 7.06 million pigs were raised in local farms, the report showed.