“You are a man who has enough courage to annul a wrong and mistaken action,” Gadhafi wrote in a rambling, three-page letter to Obama obtained by the Associated Press on Wednesday. “I am sure that you are able to shoulder the responsibility for that.”

The White House confirmed the letter, but top officials shrugged it off.

“I don’t think there is any mystery about what is expected from Mr. Gadhafi at this time,” Secretary of State Hillary Rodham Clinton said, repeating U.S. and NATO demands that Gadhafi’s forces pull back and cease attacks. She also renewed a demand that Gadhafi step down from power and leave the country.

Rebels and pro-government forces waged nearly stalemate battles in Libya, while a former U.S. lawmaker made an unendorsed private trip to Tripoli to try to convince Gadhafi to step down. An Obama administration envoy continued meeting with Libyan opposition figures in the rebel-held city of Benghazi, with no decision on whether to increase U.S. help for the rebels seeking Gadhafi’s ouster.

The rebels, aided by U.N.-authorized airstrikes intended to protect civilians from Gadhafi’s forces, have maintained control of much of the eastern half of Libya since early in the uprising, while Gadhafi has clung to much of the west. Gadhafi has been putting out feelers for a cease-fire, but he refuses to step down.

Neither government forces nor the rebels have made any serious gains in recent days and the conflict has shifted to smaller objectives on both sides such as control of the key oil port of Brega, where fighting has flared on the outskirts. 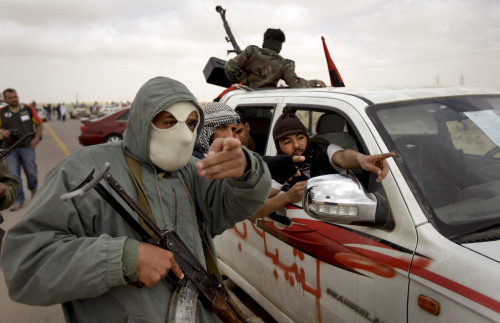 Libyan rebel fighters point to the distance as black smoke rises on the skyline (unseen), near Brega, Libya, Wednesday. (AP-Yonhap News)
In the letter, Gadhafi implored Obama to stop the NATO-led air campaign, which he called an “unjust war against a small people of a developing country.”

“To serving world peace ... Friendship between our peoples ... and for the sake of economic, and security cooperation against terror, you are in a position to keep NATO off the Libyan affair for good,” Gadhafi wrote in the letter.

“I am sure that you are able to shoulder the responsibility for that.”

Neither White House press secretary Jay Carney nor State Department spokesman Mark Toner would discuss the details of the letter.

Gadhafi told Obama that a democratic society could not be built through the use of missiles and aircraft. He also repeated his claim that the rebels seeking his ouster are members of the al-Qaida terrorist network.

Addressing Obama as “our son” and “excellency,” Gadhafi said that his country had been hurt more “morally” than “physically” by the NATO campaign.

“Our dear son, Excellency, Baraka Hussein Abu oumama, your intervention is the name of the U.S. is a must, so that NATO would withdraw finally from the Libyan affair,” Gadhafi wrote. “Libya should be left to Libyans within the African union frame.”

Gadhafi said his country had already been unfairly subjected to “a direct military armed aggression” ordered by then-President Ronald Reagan, who famously called the leader the “Mad Dog of the Middle East,” in 1986, as well as earlier rounds of U.S. and international sanctions.

Although he listed a litany of complaints, Gadhafi said he bears no ill will toward Obama in the letter, which was dated April 5, 2011 in Tripoli and is signed by “Mu’aumer Qaddaffi, Leader of the Revolution.”

“We have been hurt more morally (than) physically because of what had happened against us in both deeds and words by you,” he wrote. “Despite all this, you will always remain our son whatever happened. We still pray that you continue to be president of the U.S.A. We Endeavour and hope that you will gain victory in the new election campaigne.”

Meanwhile, former congressman Curt Weldon, a Pennsylvania Republican who has visited Libya twice before, arrived in Tripoli on Wednesday at Gadhafi’s invitation. Weldon said he is on a private mission to urge the Libyan leader to step down.

The State Department dismissed the significance of Weldon’s visit, saying he had been warned of the dangers of traveling to Libya, was not traveling on behalf of the administration and not carrying any message to Gadhafi from Washington.

“I don’t know if it is helpful or unhelpful,” Toner said of the trip. “He is not representing the U.S. government.”

Weldon was in Tripoli as U.S. envoy Chris Stevens was meeting rebels in their de facto capital, Benghazi, to gauge their intentions and capabilities.

Stevens held a second day of talks with opposition figures in Benghazi aimed at determining exactly how the administration could assist them.

“We will wait to hear more from him. He is obviously doing an assessment right now,” Clinton told reporters after meeting with Italian Foreign Minister Franco Frattini on Wednesday. Italy is among a handful of countries, including France and Qatar, that have recognized the opposition’s transitional council.

Clinton said no decision had been made and Frattini said Italy understood that the U.S. wanted a better picture of the council before taking a similar step.

On Wednesday, rebel forces gathered outside Brega but made no clear move to advance. Many posed for photos for the gaggle of foreign photographers. One young rebel dropped a grenade on the road as his pickup truck sped by and then sheepishly got out and picked it up as the crowd looked on in concern.

Rebel leaders have complained that NATO airstrikes are coming too slowly to give them a clear battlefield edge. But NATO and U.S. commanders acknowledge that pro-Gadhafi units have frustrated the air campaign by moving into civilian areas and new NATO tactics are needed.