Nitrogen can prevent highly combustible hydrogen from exploding ― as it did three times at the compound in the early days of the crisis, set in motion March 11 when cooling systems were crippled by Japan’s 9.0-magnitude earthquake and tsunami.

Nuclear officials said there was no immediate threat of more explosions, and but the nitrogen plans were an indication of the serious remaining challenges in stabilizing reactors at the Fukushima Daiichi plant and halting the coastal radiation leaks that have cast a shadow on northeastern Japanese fisheries.

Nitrogen normally is present inside the containment that surrounds the reactor core. Technicians will start pumping more in as early as Wednesday evening, said Junichi Matsumoto, a spokesman for the plant operator. They will start with Unit 1, where pressure and temperatures are highest.

“The nitrogen injection is being considered a precaution,” said spokesman Hidehiko Nishiyama of Japan’s Nuclear and Industrial Safety Agency. 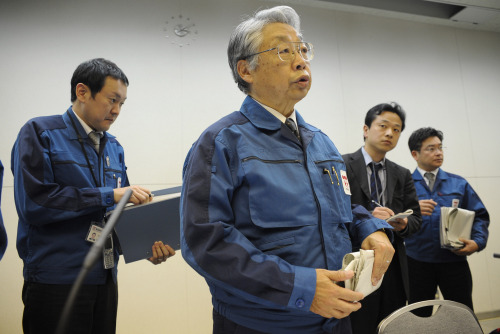 Tokyo Electric Power Co. Executive Vice President Takashi Fujimoto (front) attends a press conference at the company’s headquarters in Tokyo on Tuesday. (Xinhua-Yonhap News)
Workers have suffered near-daily setbacks in their race to cool the plant’s reactors since they were slammed by the tsunami, which also destroyed hundreds of miles of coastline and killed as many as 25,000 people.

But there was a rare bit of good news Wednesday when workers finally halted a leak of highly contaminated water into the ocean that had raised concerns about the safety of seafood.

Officials had said the runoff would quickly dissipate in the vast Pacific, but the mere suggestion that fish from the country that gave the world sushi could be at any risk stirred worries throughout the fishing industry.

In the coastal town of Ofunato, Takeyoshi Chiba, who runs the town’s wholesale market, is warily watching the developments at the plant, about 200 kilometers down the coast.

“There is a chance that the water from Fukushima will come here,” he said, explaining that fishermen in the area still haven’t managed to get out to sea again, after the tsunami destroyed nearly all of their boats. “If Tokyo decides to ban purchases from here, we’re out of business.”

After radiation in waters near the plant was measured at several million times the legal limit and elevated levels were found in some fish, the government on Monday set its first standard on acceptable levels of radiation in seafood.

“Right now, just because the leak has stopped, we are not relieved yet,” Chief Cabinet Secretary Yukio Edano said. “We are checking whether the leak has completely stopped, or whether there may be other leaks.”

Stemming the leak of highly radioactive water is progress because it limits the contamination of the surrounding environment, but now workers must turn their focus to their primary goal: cooling the reactors and bringing them under control.

That mission has been hampered by highly contaminated water that is pooling throughout the plant, making it difficult or impossible to access some areas.