Since Everest was first conquered in 1953, thousands of people have climbed it, leaving behind the empty oxygen bottles, ropes, tents and other garbage that made their journey possible.

Nepal’s government has since imposed regulations that require climbers to bring down everything they take up the mountain or lose their deposit, but the slopes are still littered with debris from past climbs.

The team that left Katmandu on Wednesday ― led by Apa, a Sherpa who has climbed Everest a record 20 times ― plans to bring down 5,000 kilograms of garbage during the spring climbing season.

“I want to do this for my country, my people and for Everest,” said Apa, who uses only one name.

The team hopes to clear 4,000 kilograms of garbage from the lower part of the mountain and another 1,000 kilograms from near the 8,850-meter summit. 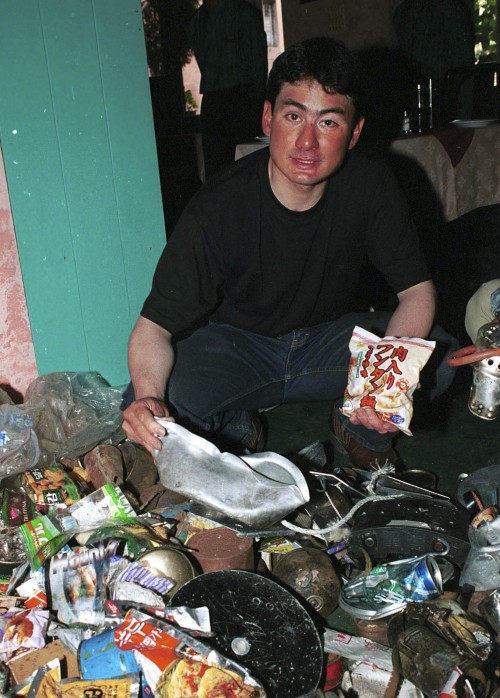 Japanese mountaineer Ken Noguchi shows some of the 1,600 kilograms of garbage he brought back from Mount Everest in Katmandu. (AP-Yonhap News)
The garbage will be carried down by expedition members as well as by porters and guides of other expeditions, who will be given $1.4 for every kilogram they haul out.

Ang Tshering, organizer of the Eco Everest Expedition, said this is the fourth year a clean up expedition has been held.

Apa first climbed Everest in 1989 and has repeated the feat almost every year since. He has been campaigning about the degradation he has seen on the Himalayan peaks due to global warming and other issues.

He said when he first began climbing Everest, the trail to the summit was covered with ice and snow. Now, it is dotted with bare rocks. The melting ice has also exposed deep crevasses, making expeditions more dangerous.

Apa grew up in the foothills of Everest and began carrying equipment and supplies for trekkers and mountaineers at age 12. He moved to the United States in 2006 and lives in the Salt Lake City suburb of Draper.