Tomlin (1-0) allowed one run and three hits in seven innings, taming a star-studded Boston lineup that came in batting just .200 and has yet to find its groove.

Tony Sipp worked a perfect eighth before Indians closer Chris Perez made things interesting in the ninth. He gave up a one-out single to Dustin Pedroia and a two-out walk to Kevin Youkilis before retiring David Ortiz on a liner to left for his first save.

This is not what the Red Sox expected ― or anyone expected from them.

Picked by many to win the AL pennant in 2011 after adding All-Stars Adrian Gonzalez and Carl Crawford this winter, they were swept in three straight games to open the season in Texas, where the Rangers clubbed 11 homers and outscored Boston 26-11. 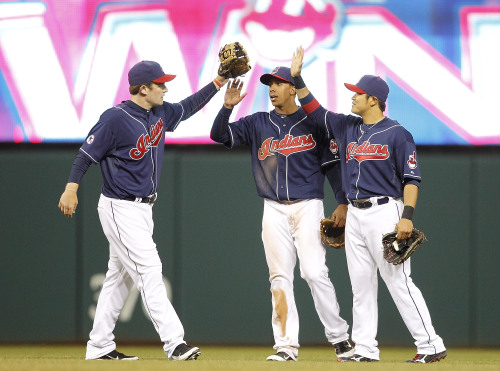 Left to right: Austin Kearns, Michael Brantley and Choo Shin-soo of the Cleveland Indians celebrate a 3-1 win over the Boston Red Sox at Progressive Field in Cleveland, Ohio, Tuesday. (AFP-Yonhap News)
It’s still early, but unless Boston gets things turned around soon, it won’t be for very long. A trip to Cleveland to face the youthful Indians figured to help, but so far, it’s been more of the same.

With a gametime temperature of 42 degrees and dropping and a stiff wind blowing in off Lake Erie, it felt more like the Browns should be hosting the Patriots. Several of the Red Sox snatched up long parkas and oversized mittens from a large duffel bag to combat the elements.

“I’m putting one of these in my locker right now,” Crawford said before stashing a coat in his locker.

It may be unseasonably cold here, but the temperature back home is rising.

The beloved “Sawx” are struggling.

Boston fans were counting on Beckett, the one-time ace who struggled last season and again in spring training, to stop the skid.

The right-hander was making his first start in Cleveland since Game 5 of the 2007 ALCS, when he saved Boston’s season by holding the Indians to five hits and striking out 11 in eight innings. The Red Sox rallied from a 3-1 deficit and won the series in seven, then added a World Series crown.

The Indians managed just one hit off Beckett for three innings before getting three and scoring two runs in the fourth.

Travis Hafner, showing signs of being able to turn on pitches again, rocketed a double off the right-field wall with one out and scored on Orlando Cabrera’s single. Beckett walked Austin Kearns and struck out Matt LaPorta on a nasty changeup before No. 9 hitter Hannahan grounded a run-scoring single to center.

Cleveland made it 3-1 in the fifth when Asdrubal Cabrera doubled, moved up on a groundout and scored on Carlos Santana’s sacrifice fly.

Beckett allowed three runs and five hits in five innings, not a bad start, but not good enough to get Boston its first win.

Indians manager Manny Acta said before the game that he didn’t expect Tomlin, who went 6-4 in 12 starts after being recalled from the minors last July, to be intimidated by Boston’s loaded lineup.

The right-hander nearly got through the first two innings unscathed, but walked Ortiz with two outs in the second after getting ahead 1-2 in the count. J.D. Drew followed with a double and Jarrod Saltalamacchia snapped an 0-for-10 start with an RBI single.

Choo Shin-soo, who led the AL with 14 outfield assists, kept it 1-0 by throwing Drew out at the plate.