[ The Korea Herald – Send E-mail ]
High winds, rain hit U.S. South, at least 8 killed
By 박한나
Published : Apr 6, 2011 - 19:47
Updated : Apr 6, 2011 - 19:47
JACKSON, Georgia (AP) ― An enormous tree limb that crashed through a Georgia family’s bedroom killed a father and the young son he was holding in his arms Tuesday as a fast-moving storm system pounded the South with tornadoes, hail and spectacular lightning.

At least eight people were killed around the region, including several who died on roads made treacherous by downed trees and power lines.

Paramedics found the 4-year-old boy, Alix Bonhomme III, wrapped in the arms of his father, Alix Bonhomme Jr., in a sight so wrenching that even grizzled rescuers wept. Bonhomme’s fiancee, Marcie Moorer, and the couple’s younger son were cowering in another room during the storm and escaped injury.

Moorer, who was still in pajamas hours later, said she still couldn’t fathom what happened when the storm rumbled through Jackson, a town about 72 kilometers south of Atlanta. Her 3-year-old son Iysic rode his tricycle around a relative’s front yard as she looked on.

“I’m still in shock. It hasn’t hit me yet,” said a bleary-eyed Moorer, who was planning to marry Bonhomme in July. “We’re just trying to take it one day at a time.”

The storms were part of a system that cut a wide swath from the Mississippi River across the Southeast to Georgia and the Carolinas on Monday and early Tuesday. Drivers dodged debris during the morning commute in Atlanta, where one person was killed when a tree fell on his car. 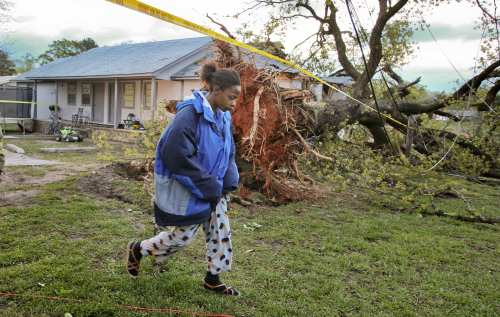 Marcie Moorer, whose 4-year-old son was killed along with his father walks near a downed tree in Jackson, Georgia on Tuesday. (AP-Yonhap News)
The National Weather Service had confirmed at least six of the nearly two-dozen possible tornadoes it was investigating in several states.

In rural south Georgia, authorities said 45-year-old Christopher McNair was found dead under debris after a mobile home in Dodge County was ripped from its foundation by a tornado. An unidentified Irwin County man was killed when a tree struck his home, according to emergency officials. And 56-year-old Ronnie Taylor, a Colquitt County road worker, was killed when he struck a large oak tree in the middle of the road as he was driving to work early Tuesday.

Memphis fire officials said an 87-year-old man found dead in his home Monday was electrocuted by a downed power line. In southern Mississippi, a 21-year-old man was killed when his car struck a tree that had fallen across a road, Copiah County coroner Ellis Stuart said.

The Georgia Department of Corrections said Robert Kincaid Jr., a state inmate being housed in the Colquitt County Prison, was killed Tuesday morning during storm cleanup.