[ The Korea Herald – Send E-mail ]
Obama kicks off re-election campaign
By 이윤주
Published : Apr 5, 2011 - 20:10
Updated : Apr 5, 2011 - 20:10
WASHINGTON (AP) ― No longer the fresh voice of change, President Barack Obama embarked on a bid for re-election Monday by asking a divided, anxious electorate to let him finish the job he won in 2008. He’s getting an early start against a Republican field that’s still undefined, but he’s saddled with an ailing economy that still isn’t working for millions of voters.

Obama began with an effort to recapture his outsider’s touch of 2008, bypassing a public statement from the White House in favor of an email sent to millions of supporters.

He offered a kickoff video in which official Washington is ignored and even Obama himself only makes a fleeting appearance. What the campaign wanted voters to see instead were people like them speaking of real-life concerns and their faith in Obama, against wholesome backdrops in every clip: a church, a farm, a family in a kitchen, an American flag.

He told supporters later in the day he needs their help again, perhaps more than he did four years ago, because “we may not have the exact same newness that we had in 2008.”

“But that core spirit ... is still there and it’s still in you and so I hope that even though we’re a little older and a little wiser now than we were back in 2007 and 2008, I hope everybody is ready to run that race one more time,” Obama said in a conference call with backers.

This time around, Obama carries both the benefits and baggage of being the establishment candidate.

The president now owns an economy that is adding jobs but still leaving millions of people without help or work. As the incumbent, he can blow into town on Air Force One, draw unparalleled free media coverage and command all the other perks of the presidency. But he must also remobilize his coalition and reenergize it, too, including getting back the independent voters who swung Republican in last year’s midterm elections.

Obama ran once on hope. This time he will run on his record as well. That means voters will evaluate him on what he has gotten done, including laws to reshape health insurance and Wall Street behavior, and the promises he has not delivered upon, including immigration reform and closing the prison at Guantanamo Bay, Cuba. 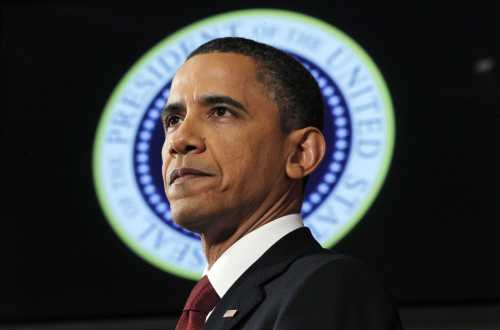 (AP-Yonhap News)
A huge part of his challenge will be to spark the voter inspiration that often got lost in the slog of governing. His new campaign video gave a nod to the challenge. A woman named Alice from Michigan said: “We’re paying him to do a job. So we can’t say, ‘Hey, could you just take some time off and come and get us all energized?’ So we better figure it out.”

Obama filed his candidacy paperwork Monday, about 20 months from Election Day, so he can begin raising money in earnest for a potential campaign fund of $1 billion or more. More than a dozen Republicans are seriously considering trying to unseat him, but none has declared yet.

What comes next is a loud, undefined, unpredictable White House contest. The early party primary voting is not set to begin until next year.

Obama, as both president and candidate, is trying to keep those two roles separate. “Even though I’m focused on the job you elected me to do, and the race may not reach full speed for a year or more, the work of laying the foundation for our campaign must start today,” he said in the email to backers.

His campaign this time will not have the foil of George W. Bush, an unpopular incumbent who helped define the mood of 2008 without being on the ballot. The White House is eager to portray the election as a choice, but the look and feel of that contrast will not become evident until a competitor emerges from a wide-open Republican field.

Regardless, what the White House expects is that the economy will drive the election. The race could well pivot on whether voters buy into Obama’s arguments about progress on his watch ― that an economy on the brink of disaster is steadily adding jobs again, and he has a vision for more. Or whether voters vent their displeasure that change hasn’t happened faster.

Here, as in many cases, incumbency can cut both ways.

The nation’s unemployment rate just dropped to 8.8 percent, its lowest level in two years. The private sector is starting to add sizable numbers of jobs again, and such trend lines always tend to attach themselves to how a president is viewed. The more the economic situation improves, the better Obama can argue he is the right steward of the recovery.

However, perceptions of the economy have not improved over the course of Obama’s presidency, and that lag can amount to a major vulnerability.

Overall, 35 percent of people in an Associated Press-GfK poll say the nation is heading in the right direction. That’s the same share that said so in January 2009 before he took office.

“I think it starts with the economy. I don’t think anybody could tell you for sure how it’s going to end, especially with all the tumult around the world right now,” said Stephen Craig, a political science professor at the University of Florida.

Indeed, Obama is contending with an exploding world. The violent upheaval across the Middle East and Africa has consumed attention in 2011 and drawn the United States into a military conflict in Libya on top of the wars in Afghanistan and Iraq. On the domestic front, Obama is grappling with a budget fight and the potential for a government shutdown.

The president must be sensitive to how and when he campaigns or risk appearing to put his political gain above the country’s.

How he responds to domestic and foreign challenges, however, will give him chances to shape public thinking in ways no other candidates have.

Obama’s path to the required 270 electoral votes could well be tougher this time. In 2008, he reached it by aggressively turning out new and infrequent voters across the country, and making a play for states that aren’t usually contested by Democrats.