Trade Minister Kim Jong-hoon apologized to the public on Monday for mistakes in the Korean-language version of the Korea-E.U. free trade agreement.

In a news conference, he pledged to punish officials responsible for the blunder that delayed parliamentary ratification and hurt the reputation of the trade authorities.

The Trade Ministry has completed reviewing and correcting the mistakes and will present a motion to retract and resubmit the bill for ratification to the Cabinet meeting on Tuesday, he said.

When approved, it will be the third time the bill for ratifying the trade agreement with the E.U. is submitted to the National Assembly.

Kim said that despite the delays, the ministry will still push for the tentative implementation of the pact to take effect on July 1, as agreed with the European Union.

According to the ministry, its review found numerous mistakes in addition to those singled out by the media, the civic group Lawyers for Democratic Society and trade-law specialist Song Gi-ho in February and March.

In late February and early March, Song singled out several mistakes in the Korean version of the agreement, leading to the ministry retracting and resubmitting the bill to the National Assembly twice.

Song was followed by Lawyers for Democratic Society which informed the Trade Ministry of 160 mistakes on March 22.

The ministry’s review found a total of 207 errors including 182 cases of mistranslations, 16 cases of grammatical errors and 59 cases where words were omitted or added to the Korean version of the pact.

The final corrections arrive more than a month after mistakes in the Korean-language version of the pact were pointed out the first time. In addition, translation errors have led to the ministry retracting and resubmitting the bill for ratification of the Korea-E.U. free trade agreement twice. 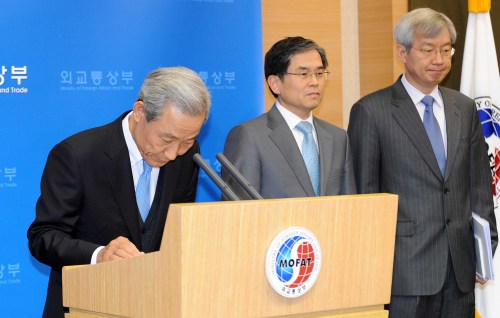 Trade Minister Kim Jong-hoon bows to apologize for the translation errors in the Korean version of the Korea-E.U. FTA documents at a news conference at the Ministry of Foreign Affairs and Trade in Seoul on Monday. (Lee Sang-sub/The Korea Herald)
“I admit that there were some unsuitable judgments made. The English-language version was made public about a year and five months ago, and the Korean version less than a month later,” Kim said. He added that as the documents were available to the public for relatively long periods, the ministry had judged that “those who would see them would have already seen them,” leading to the ministry’s assessment that the texts were of sufficient standards.

“But, mistakes kept emerging, and I made the decision to review the entire text page by page. That was March. Looking back now, there were inadequacies (in the response) and (the ministry) will improve the system.”

Kim also said that an audit regarding the issue is underway and that responsible individuals will be reprimanded according to its results.

Regarding the process of reviewing the trade pact with the United States, Kim said that while it is still in the early stages, “not many” mistakes have been found and whether the bill for its ratification needs to be retracted and resubmitted will be decided once the review is complete.

When announcing the measures for reviewing and correcting mistakes in international trade agreements on March 9, Deputy Trade Ministry Choi Seok-young said the pact with the United States will go under review from mid March.

Under the measures announced by Choi, which included plans for improving related processes in the ministry, the ministry will establish a six-stage translation process.

The second draft will then be reviewed by the Ministry of Government Legislation, before being submitted to the Cabinet meeting in the sixth and final stage, the Trade Ministry said.