New Japanese textbooks claiming Japan’s sovereignty over Dokdo disappointed many in Korea following a rare outpouring of sympathy for their former colonial ruler, hit hard by a devastating earthquake and tsunami.

The Japanese Textbook Authorization and Research Council announced Wednesday its review results of middle school textbooks that will be used from next year.

All the geography and social study schoolbooks contained Tokyo’s claims to the rocky islets in the East Sea, called Takeshima in Japan. For the first time, a history book having the unfounded claim was also included in the list of approved textbooks.

In the previous inspection five years ago, ultra-rightist Husosha Publishers was the only one that claimed, “Takeshima is occupied illegally by Korea.”

However, this time, major publishers joined in, including Tokyo Shoseki, whose textbooks were used in 61 percent of middle schools in 2005.

In addition to the Dokdo issue, no Japanese textbooks approved Wednesday include depictions of the thousands of East Asian women who were forced to provide sexual services for Japanese soldiers during World War II.

At an academic conference last week, experts here expressed concerns that Japan will take a stronger stance on territorial issues in the coming years.

“Their rhetoric could be strengthened to the extent of that of the Northern Territories,” said Nam Sang-koo, a researcher at the Northeast Asian History Foundation.

Nam introduced the teaching guidelines by Japan’s Education Ministry in 2008, in which teachers are required to make sure that “The Northern Territories are Japan’s indigenous territory but are currently occupied by Russia. So the Japanese government is calling for their return.” 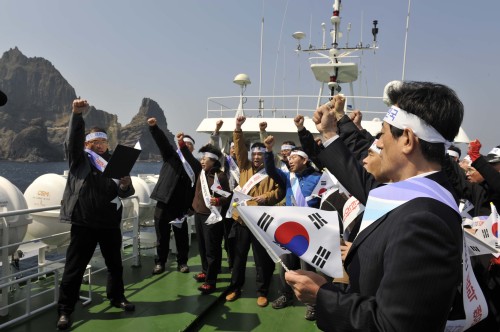 (Education officials from North Gyeongsang Province denounce Japanese textbooks’ territorial claims over Dokdo aboard a ship near the rocky islets in the East Sea last week. Yonhap News)
Japan seized the Northern Territories, or the Kuril Islands, during the Russo-Japanese War in the early 20th century, but gave up all claims in the San Francisco Peace Treaty after its defeat in World War II.

Ahead of the war with Russia, Japan had taken over Dokdo as a strategic location.

Nam predicted that Japan’s claims to Dokdo would appear in all schoolbooks in the coming years as the government’s educational law and teaching manuals are putting more emphasis on teaching patriotism and public sense.

“Textbooks reflect a country’s future vision. The more frequent appearance of Dokdo claims in textbooks will become an obstacle for coexistence and prosperity in East Asia as well as for Korea-Japan relationship,” he said.

“We should not be obsessed with some teaching manuals but make efforts to revise the errors from the perspective of East Asia’s coexistence and prosperity.”

Yuji Hosaka, professor and head of the Dokdo research center at Sejong University in Seoul, suggested that the Korean government take a more active attitude in responding to Japan.

“The Korean government has been passive, saying Japan’s claim is groundless. But that kind of logic may not appeal to the world,” said the professor, who became a naturalized Korean citizen in 2003.

“We should repute the claims based on objective and correct documents and those materials should be exposed through the Internet to be shared with more people.”

Shin Joo-baek, a professor at Yonsei University, said that Japan is isolating itself in the international community.

“The Dokdo issue is also related to the territorial disputes with Russia and China. By claiming Dokdo is its own territory, Japan has blocked its own retreat path. As Russia and China join to slam Japan, it would suffer under a disadvantage in the longer term,” he said.

“The new textbooks reflect the general stance of the Japanese government. They are based on loose materials and weak logic. Our institute has collected a variety of documents and maps in and out of the country to fight back against Japan’s claims.”