The flavor develops through a required 60-day aging process designed to kill harmful bacteria. Now, that process faces possible reregulation by the U.S. Food and Drug Administration (FDA), which is reexamining whether pathogens might survive the aging process. There’s industry concern that the agency might lengthen the aging period or even ban the sale of cheeses made with raw, or unpasteurized, milk.

“Why try to reregulate what’s already regulated?” said John Aylward, co-owner with his wife, Erika, both 40, of the Boulevard Market in Tecumseh, Michigan.

The Aylwards opened their artisan cheese and specialty food shop, about 30 minutes southwest of Ann Arbor, Mich., in 2004. Two years later, they added the Four Corners Creamery inside the shop. They sell an array of cheeses made from both raw and pasteurized milk that are either imported or made in their licensed creamery. 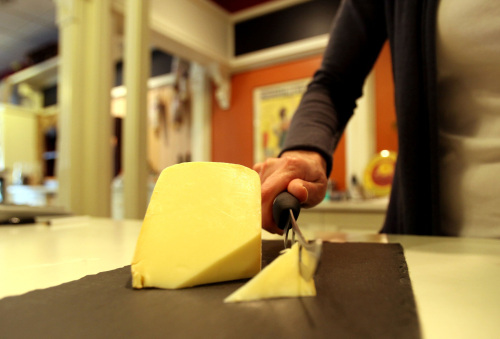 “It’s aged for 60-plus days, which is the key because the cultures and enzymes are different after 60 days,” Aylward said.

Nearly every Thursday, Patty Swaney drives about 10 miles from her Manchester, Michigan, home to the Aylwards’ store for cheeses and other products.

“I love the fact that he makes raw milk cheese, and I try to support him in everything he makes,” Swaney, 64, said. Swaney thinks what’s important is “the source of your product, whether it’s vegetables or meats ― know your source.”

“They tend to have almost a grassy taste, and the taste will linger a lot longer in your mouth,” Loomis said.

“We kind of celebrate the fact that there’s a certain seasonality to cheeses when they are going to be at their best and more consistent,” Loomis said. Pasteurizing the milk destroys those nuances along with the pathogens, leaving “a fairly monotone range of flavor,” he said.

That may be fine for big manufacturers seeking consistency, but not for those who prize handcrafted cheeses.

“I believe there is not an issue if cheeses made with raw milk are done correctly and aged properly,” Jenness said.

The FDA said a risk profile examining the science of the raw milk issue will be published by the end of this year. If the agency finds that changes are needed, they would be done through a formal rule-making process.