Peter Oppegard, Kim‘s coach, flew in from Los Angeles earlier in the day to join his prized pupil in preparations for the 2011 World Figure Skating Championships in Moscow next month. The duo opened their practice for about 10 minutes to the press at the National Training Center in northern Seoul.

“Now that the coach is here, I will bear down and concentrate even more,” Kim said.

The world championships have been rescheduled to April 24-May 1. The event was initially set for March 21-27 in Tokyo but was moved following a devastating earthquake and the ensuing radiation scare in Japan earlier this month.

Kim said she will make sure the scheduling change won’t affect her. 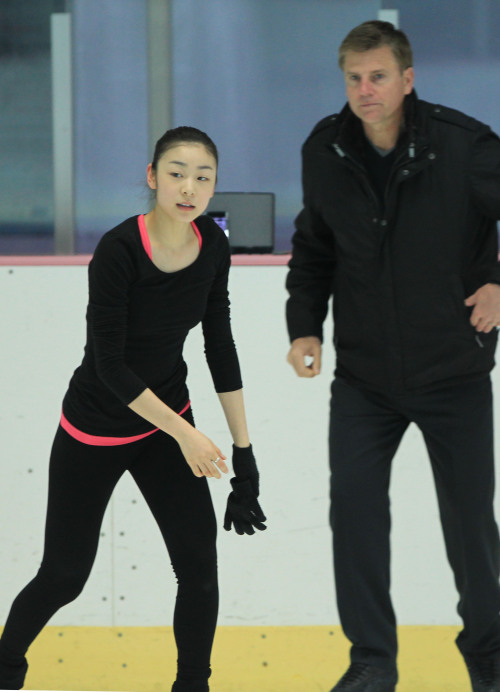 Kim Yu-na takes part in a practice session with new coach Peter Oppegard. (Yonhap News)
“There have been changes to the timetable, but I will just keep training the way I have all along,” she said. “In the U.S., I put myself in perfect shape for March in Tokyo. I will work hard over the next month to regain that form.”

Oppegard said most of the technical preparations had been done in the U.S. and the key would be to improve Kim‘s conditioning until the Moscow competition.

The coach also said Kim is a great athlete who should be able to make necessary adjustments to the scheduling change.