Velarde said he sought out Greg Anderson because of his link to Bonds, and they met “in various parking lots.”

“I can’t remember each,” Velarde said Wednesday during his 12 minutes of federal court testimony.

He wasn’t sure exactly how many times he met Anderson. He was asked whether it was more than 10.

“That would be a fair number,” he said.

And always, there would be an injection.

“Every meeting,” he said.

Velarde became the fourth and likely final ballplayer to say he purchased performance-enhancing drugs from Anderson, who has been jailed for contempt after refusing to testify against Bonds, his childhood friend.

With Anderson unavailable, prosecutors called Jason Giambi, Jeremy Giambi, Marvin Benard and Velarde as witnesses to describe Anderson’s drug-dealing ― an attempt to show jurors Bonds must have known the substances he was receiving from Anderson were performance-enhancing drugs. None of the players had personal knowledge of any drug use by Bonds. 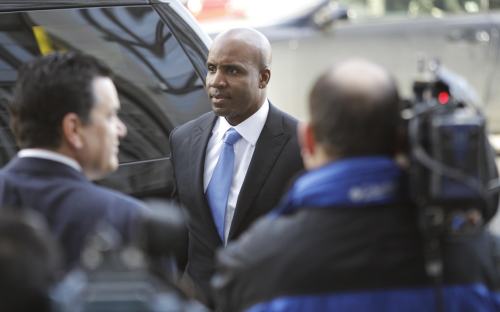 Barry Bonds arrives at the federal courthouse in San Francisco on Wednesday. (AP-Yonhap News)
Three more players were among the 50 potential witnesses on a list submitted to the court by prosecutors on March 7 ― 1987 NL Rookie of the Year Benito Santiago, Armando Rios and Bobby Estalella ― but Assistant U.S. Attorney Matthew A. Parrella told U.S. District Judge Susan Illston on Wednesday that the government intended to call just three more witnesses.

His statement came as a surprise. Prosecutors said in the March 7 filing that Estalella would testify Bonds admitted to him that he used performance-enhancing drugs and they had several discussions about the subject.

Benard finished testifying Wednesday morning and was followed by Velarde. Then came a current IRS special agent and a former one, along with six of the people who worked at the UCLA lab as it processed Bonds’ 2003 drug test. Giving often tedious testimony, the eight established the chain of evidence for the jury of Bonds’ urine from the time federal agents seized it from Quest Diagnostics in April 2004 until the time it tested positive for the steroid Tetrahydrogestrinone (TGH) in March 2006.

After just five witnesses appeared in the first four days of testimony, the trial’s pace has increased. Five witnesses finished their testimony on Tuesday and 10 more completed their questioning on Wednesday.

With prosecutors planning to read portions of Bonds’ grand jury testimony to the jury, the government’s presentation is likely to wrap up by early next week. Thursday’s session will be cut short because Illston will leave to attend the swearing in of a judge late in the day. After that, the trial resumes Monday.

Bonds, baseball’s season and career home run king, is charged with four counts of lying and one count of obstruction for telling a grand jury in 2003 that he didn’t knowingly use performance-enhancing drugs. Wearing a blue suit and blue tie, he took notes and conferred with lead lawyer Allen Ruby during a day filled with science, such as explanations of how an isotope-ratio mass spectrometer works and the difference between carbon-12 and carbon-13.

“I think we are all feeling a little obtuse right now,” Illston said late in the day.