Rep. Park Geun-hye, currently the ruling Grand National Party’s strongest presidential hopeful, on Thursday expressed regret over the government’s decision to chuck President Lee Myung-bak’s election pledge to build an airport in the southeastern part of the country, adding that Korea should keep pushing for it.

The GNP’s factional leader and Lee’s political archrival told reporters that it was “regrettable that the government broke its promise to the people,” during a visit to Daegu, her home turf.

“(An airport in Yeongnam, or the country’s southeastern region) may not be immediately economically viable, but I’m sure we will need it in the future. (Korea) must keep pushing for the airport (construction),” she said.

President Lee was set to speak in a press conference Friday about the decision to retract his election pledge to build a new international airport in Yeongnam amid a fierce political backlash.

Hong also said the president did not show any response to Park’s remarks, adding “no response is also a response.”

The airport, which had been an object of fierce competition between politicians of Busan and Daegu, has been cancelled, but its political aftermath is likely to have an impact on the April 27 by-elections as well as the general and presidential elections next year. 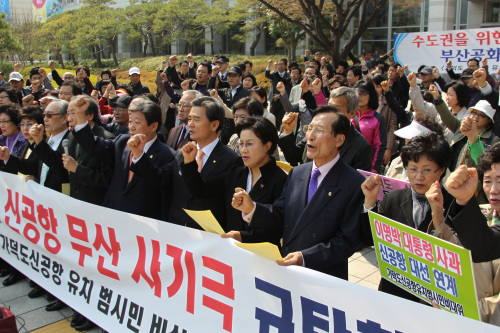 Civic leaders call for the withdrawal of the decision to scrap an airport construction plan Thursday in Busan. (Yonhap News)
In response to a question on whether she plans to include the airport in her presidential campaign pledges, Park said she believes “it should be pushed ahead with.”

“I wish (that the government) doesn’t break promises with the people in the future,” she said.

“Our politicians must take this incident as an opportunity to renew ourselves. Korea will be a predictable country when the government and politicians keep their word.”

The Land Ministry announced Wednesday that neither of the final candidate sites ― Gadeok Island, located just west of Busan, and Miryang in South Gyeongsang Province ― was fit for the new airport in terms of economic efficiency.

The Land Ministry presumes that even after the third expansion of Incheon airport is completed in 2025, it won’t be enough to meet all of our air transport demands, Park said.

Noting that the chair of the panel that reviewed the feasibility of the airport construction said the country would need a new airport in the southeast in the long run, Park said “that is precisely a national interest for the future.”

Some talk about a declining demand for small domestic airports, but an international airport is different, she said.

“It takes about 10 years to build such airports, so it may be too late if we wait until we urgently feel the need.”

About the Lee administration’s failed attempt to reverse another election pledge ― the relocation of government ministries to a new city in South Chungcheong Province ― Park said the Sejong City relocation scheme was different from the airport as it was already put into law.

“The Sejong City (plan) had passed the National Assembly as a law, whereas the airport cancellation was a failure to implement an election promise,” she said.

Park, a factional leader who had competed against Lee for the GNP’s presidential candidacy in 2007, has opposed the president’s moves to rewrite the law on the relocation to Sejong, which passed the parliament in 2005 under former Roh Moo-hyun administration.

Angered by the airport’s cancellation ahead of the elections, several GNP assemblymen from the Yeongnam region have demanded Lee leave the GNP.