The country’s largest automotive industry show, the Seoul Motor Show, opens to the public Friday with carmakers vying to catch the attention of the expected 1 million visitors with new models and technologies.

The show, which will be held until April 10 at the KINTEX exhibition center in Goyang, Gyeonggi Province, is being held on the biggest scale yet, with 12 domestic carmakers and 23 foreign brands showing off their wares.

With an overriding theme of “Evolution, Green Revolution on Wheels,” the show is no different from other similar events in that eco-friendly vehicles, both production and concept, take center stage at many of the booths.

However, the show is not without eye-catching sports cars and concept cars, many of which are world or Asia premieres.

This year’s offerings include 54 new vehicles, of which five will be world premieres while 22 models will be unveiled for the first time in Asia.

Unsurprisingly, the show is dominated by Korea’s five major carmakers, their booths taking up much of the floor space.

The country’s largest carmaker Hyundai Motor Co. has on display a total of 23 passenger vehicles. 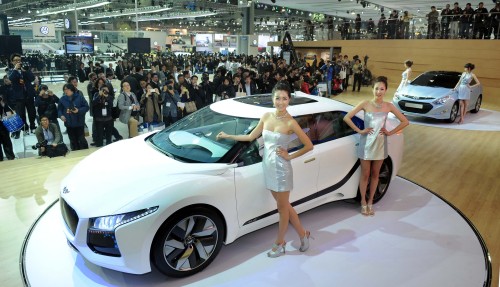 Hyundai is also showing off its new technologies and potential future businesses, with a significant part of its booth dedicated to such items.

Displays in the section include bicycles that can alternate between electric motor and the conventional pedal-powered system, and onboard connectivity systems that allow portable electronics devices to be linked up to the car’s system.

Hyundai’s sister carmaker Kia Motors Corp. is using the stage to show off the hybrid electric version of its hit midsized sedan K5 and the concept car Naimo. 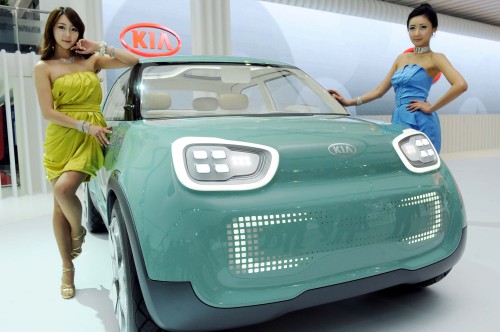 Kia Motors Corp.’s Naimo concept car.
Having focused on design in recent years, the main eye-catching feature of Kia’s concept car Naimo is design, which according to the company’s chief design officer Peter Schreyer was developed to show the carmaker’s “Korean factor.”

According to Schreyer, the Naimo’s boxy exterior is covered in paint developed to resemble the color of traditional Korean ceramics, while interior features use concepts taken from hanok and utilize hanji ― traditional Korean paper ― resulting in a vehicle that shows “the heritage of Korea.”

GM Korea Co. continues to promote the range of vehicles offered by its newly-adopted brand Chevrolet. 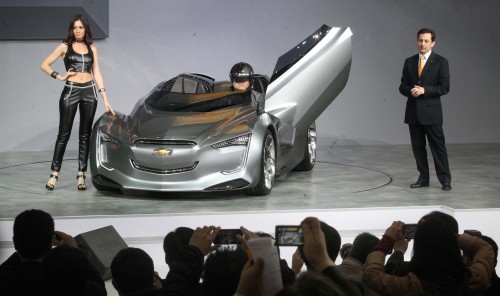 GM Korea Co. president Mike Arcamone (right) introduces the Miray concept at the Seoul Motor Show in Goyang, Gyeonggi Province on Thursday. (Park Hyun-koo/The Korea Herald)
The company has on  display classic Chevrolets including the 1956 Bel Air and 1960 Corvette, as well as models with which the brand hopes to grow in the future such as the Volt electric car.

The highlights of GM Korea’s booth are perhaps the 2011 Corvette, the concept car Miray and the Captiva SUV that will be introduced here in April

As for the Corvette, a car with no noticeable competition from domestic carmakers, the company is working to introduce it within the year.

“The Corvette will be launched before the end of the year, but the exact date depends the homologation process,” GM Korea vice president Jay Cooney said. He added that several aspects of the vehicle including noise levels may need to be changed for the local market.

“The price will also depend on homologation, as if many changes need to be made, the price will go up, but the Corvette will be the same here as it is in America; an affordable sports car.” 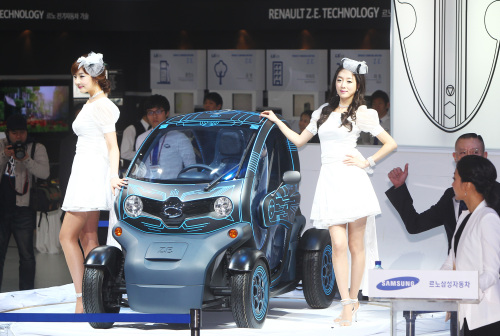 In addition, the company’s revealed some plans that had until now been unknown, with its CEO Jean-Marie Hurtiger saying that the company will expand collaboration with Samsung Group and enter the market for small vehicles.

Korea’s smallest carmaker Ssangyong is hoping to project a new and improved image of itself at the event, the first major industry event since the completion of acquisition by Mahindra and Mahindra.

Ssangyong’s electric cars are KEV2 and electric version of its new compact SUV Korando C. The two vehicles share the same technology, and the company will be operating a test-driving booth for the Korando C electric car during the show.

Other concept cars are the SUT-1, a sport utility truck displayed at the recent Geneva auto show, and a super-luxury version of the Chairman W; W Summit.

In terms of production vehicles, the highlight of Ssangyong’s booth is the new Chairman H, for which the show will serve as the launch event.

Although pushed off the center stage by Korean firms, foreign carmakers’ offerings at the event is not lacking in new cars and eye catching concept cars.

Foreign firms’ Asia premieres are dominated by U.S. brands with Ford and Chrysler vehicles accounting for six of the 13 such vehicles.

High-end marques such as Infiniti, Audi and Porsche are showing off concept vehicles at the show.

Audi’s contribution to Seoul Motor Show’s concept car lineup is the e-tron electric car, while Infiniti is putting on display the Essence concept for the first time in Korea. German luxury sports car maker Porsche is using the show to introduce the 918 RSR to Korean consumers.

This year’s Seoul Motor Show is also providing the stage for Citroen’s return to the Korean market after a nine-year hiatus, while Toyota is hinting at bigger ambitions in Korea by introducing the Corolla compact car, which holds the world sales record with more than 37 million units sold since the first generation Corolla was launched in 1966.