South Korea and Australia plan to hold cultural events in Sydney next week to celebrate the 50th anniversary of diplomatic ties.

The Ministry of Culture, Sports and Tourism said a delegation of Korean government officials including Culture Minister Choung Byoung-guk and Australian leaders in politics, culture and media will attend the cultural performance by Korean and Australian artists at Sydney Town Hall on April 4 at 6:30 p.m.

The performance is the first of a series of Korean cultural events planned to be held throughout the year in Australia. Other events include a Korean film festival, Korean pop concerts and exhibitions of Korean arts, the ministry said.

Contemporary crossover orchestra Poolim Ensemble, which performed for G20 leaders at a special cultural performance on the sideline of the G20 Seoul Summit in November, will open the performance with a song called “Beyond the Sea.” The group consists of 12 artists who either play Korean traditional music or western classical music, spicing up Korean standards with western classical colors.

Then, Korea National Ballet’s principal dancer Kim Joo-won and contemporary dancer and choreographer Lee Young-il will be on the stage with music of pianists Im Hyo-sun, Hong Dong-ki and violinist Kim Hyun-nam. 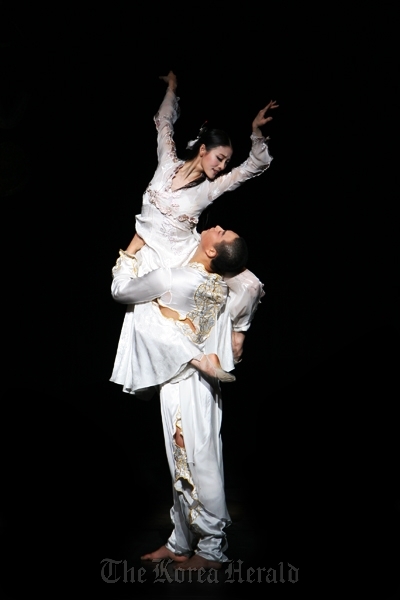 Ballerina Kim Joo-won and contemporary dancer Lee Young-il will perform at the Sydney Town Hall on April 4. (Ministry of Culture, Sports and Tourism)
Korean traditional costumes, or “hanbok,” will be presented with music from haegeum player Ccot Byel and guitarist Shin Byung-joon.

Intangible cultural property singer Ahn Sook-sun, who is also a professor of Korean traditional music at Korea National University of Arts, will stage a pansori performance, “Chunhyangga” (a love song for Chunghyang and Lee Mong-ryong).

A final performance, “Mateship,” will bring all artists back on the stage for the two countries’ national folk songs, Korea’s “Arirang” and Australia’s “Waltzing Matilda.”

Earlier in the day, a Korean Culture Center will open in Sydney, which will be the first in Oceania and the 17th in the world.

Located across from Hyde Park in the central district of the city, the 1,000-squaremeter center has a multimedia exhibition hall, Korean arts and craft room, “Sejong Geulbang” room for Korean language learning and several other spaces for the promotion of Korean culture and arts.

The ministry said the culture center will start operation with a survey asking Australians how much exposure they have to Korean culture.

To celebrate the opening of the center, Korean and Australian children will sing the two countries’ folk songs, the Society for Research of Jeongjae will re-enact traditional rituals originally performed at royal palaces during the Joseon Dynasty and Ahn will sing pansori, “Heungbuga.”

Prior to cultural exchange performances and the opening of the Korean Culture Center, Korean government officials working at Korean culture centers in the Asian Pacific region will hold a meeting from Saturday to Monday to discuss ways to spur promotion of Korean culture overseas and enhance cooperation within the region.