NANJING, China (AP) ― Conflicts over exchange rate policy surfaced Thursday at talks by finance mandarins from the Group of 20 leading economies, with both the U.S. Treasury Secretary and French President Nicolas Sarkozy urging greater flexibility as a strategy for avoiding future crises.

Despite Beijing’s insistence that its own currency regime was not on the agenda, Sarkozy opened the gathering with an urgent call for action. The U.S. and other countries say that China’s currency controls keep its yuan artificially cheap, giving Chinese exporters an unfair advantage in international markets during good economic times and bad.

“It is clear that we must evolve toward a more flexible exchange rate system that will allow us to withstand shocks,” Sarkozy said. There is also a need for rules and supervision to ensure countries are protected from excess volatility, he said.

“Now that the crisis is past, the temptation to not act is very strong. If we loose the impetus that we achieved during the crisis then the world will slide inexorably back into instability and crisis,” he said. 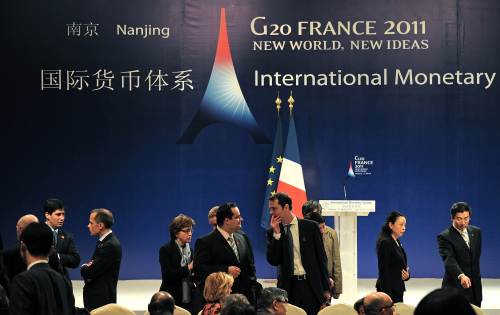 Participants wait for the opening of a one-day meeting of finance ministers and central bank chiefs from the G20 nations in Nanjing on Thursday. (AFP-Yonhap News)
But without mentioning China directly, he said there were still countries that have very tightly controlled currencies.

“This asymmetry in exchange rate policies creates a lot of tension,” he said, according to a text of the remarks provided to journalists. “It intensifies inflation risk in those emerging economies with undervalued exchange rates. And, finally, it generates protectionist pressures.”

Just before the meeting, host China signaled its own frustrations with U.S. stimulus policies, which the Chinese say are fanning surges in commodity prices.

“The U.S. Federal Reserve acts without any constraints, adding to the lack of stability in the global monetary system and also its unfairness. Only the United States can have an independent monetary policy and other countries must follow,” wrote Xu Hongcai, of the government-affiliated China Center for International Economic Exchanges.

The comments appeared aimed at deflecting criticism of China’s own currency policies ― viewed by Washington and other trading partners as a key factor in global economic strains.

China, however, has opposed focusing on exchange rates due to its resistance to letting its own currency, the yuan, appreciate against the dollar.

The talks meanwhile were somewhat overshadowed by crises in Libya and Japan. Sarkozy, who is chairing the G20 this year, made a brief stop in Beijing on Wednesday evening in an effort to soothe China’s anger over U.S. and European airstrikes aimed at enforcing a U.N. no-fly zone over strife-torn Libya.

After attending the daylong G20 “seminar” of central bank governors and Cabinet ministers, Sarkozy flies to Tokyo in a show of support for Japan’s effort to resolve a nuclear plant crisis and overcome the destruction wrought by the March 11 earthquake and tsunami which killed at least 11,000 people.

The disagreements over currencies and monetary policies were bound to shape the talks even if only indirectly, analysts said.

“There are differences of opinion between developed countries and developing countries over monetary issues,” said Zhang Xinfa, an economist at Galaxy Securities in Beijing, pointing to the stimulus-oriented policies in the U.S., Japan and Europe.

“That’s why they have fundamental differences over the future trend of exchange rates,” Zhang said.

France has made reform of the global monetary system a focal point for its yearlong presidency of the G20, along with reducing economic imbalances and volatility in commodity prices, and has sought China’s support.

China and key emerging economies, meanwhile, are eager to see changes that might reduce their own reliance on volatile dollar-denominated assets.