“The young people who will lead Japanese society in 20 to 30 years would understand that Dokdo is currently dominated illegally by South Korea. Dispatching an additional 33 Korean coast guards there is not enough,” he said.

The response came after the Japanese government approved more than 10 history textbooks by rightist publishers at the end of its one-year review of new middle school textbooks.

According to the groups, more than 70 percent of Japanese textbooks have already referred to Dokdo as Takeshima, the Japanese name for the islets.

“The adoption of some extremist textbooks should not be the reason for temporary panic. We need to prepare long-term plans,” said Kim Jeom-ku, leader of Dokdo Safeguard. 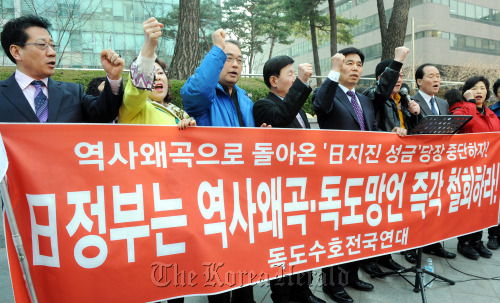 Civic group members hold a rally against Tokyo’s sovereignty claims to Dokdo in front of the Japanese Embassy in Seoul on Wednesday. (Park Hyun-koo/The Korea Herald)
Nam Sang-koo, an official at the Northeast Asian History Foundation, emphasized the role of the civil sector when it comes to the issue of textbooks.

“Based on verified historic facts, individual groups need to continue persuasion based on what problems the books have and how they will negatively affect the future relationship between Korea and Japan,” he said.

Some groups that have worked to denounce Japan’s past atrocities showed anger against Japan’s repeated provocations.

One of them was the Korean Council for Women Drafted for Military Sexual Slavery by Japan, which has called for an official apology from the Japanese government through its weekly gatherings held since 1992.

Following the deadly earthquake and tsunami in Japan on March 11, the group held a memorial event instead of a protest for the victims and their loved ones, along with collecting donations.

“We should take a strong action against the Japanese government. Due to the attitude of Japan, there are already some people who say we should stop holding the memorial event,” said Ahn Seon-mi, an official of the group.

The Voluntary Agency Network of Korea, better known as VANK, also criticized Japan for disrupting the recent positive mood between the two countries.

“If Japan continues to cause disputes in the region, it would lose its status in the international community,” said VANK head Park Ki-tae, whose organization has donated the membership fees of new members to aid in relief work in Japan.

However, charity organizations made it clear that the textbook issue should not be related to their humanitarian efforts.

“We don’t make a political decision. We will continue to deliver the donations via citizens,” said an official of the Community Chest of Korea, the nation’s largest charity which has collected about 11 billion won ($9.9 million) for Japanese victims.

The Korea Red Cross, whose donations surpassed 22 billion won, also said its fundraising campaign “has been carried out for humanitarian purpose.”