LG Group is leading the corporate sector’s campaign to buttress the competitiveness of smaller vendors and firms to help achieve a level playing field for all parties.

The group’s chairman Koo Bon-moo this year proclaimed that LG would stand at the forefront of supporting mutually beneficial growth with its partner companies, saying they were playing for the same team.

“We must take action based on the belief that the growth and development of our partners are directly connected to our own well-being and competitiveness,” Koo said in January at a meeting with his newly promoted team of about 100 top executives.

The chairman stressed that it was time to break from perceptions that LG was helping out its partner firms out of kindness.

The chairman’s pledge came on the back of increasing concerns from both the government and within the corporate sector that the faltering performance of second- and third-tier suppliers could have an ill effect on the economy as a whole.

LG has been taking the initiative to pursue parallel growth with small and mid-sized companies by following up on a number of mutual growth plans it has established over the past few years.

The group and its affiliates also have been increasing cash payments for their vendors, with a record-breaking amount of payments in cash expected this year.

LG Group indicated last year that it would be considering mutual growth as a serious issue directly related to its own future.

It announced five objectives for promoting mutual growth, showing that the company no longer believed it could stand alone or expect to be competitive without the support of strong smaller vendors and suppliers. 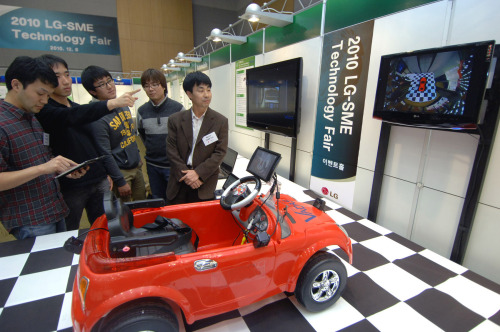 LG Group in December held a technology fair where it selected 17 vendors and suppliers to jointly develop green-growth products such as solar and electric car batteries. (LG Group)
Financial support

The four LG flagships ― LG Electronics, LG Chem, LG Display and LG Innotek ― this year were expected to make cash payments of over 5 trillion won ($4.4 billion) as of the end of March to their vendors and suppliers.

Since September these four affiliates, have been paying all of their vendors ― about 1,100 ― fully in cash.

“The example set by LG also is affecting other companies paying their suppliers, prodding them to follow suit,” said on industry source.

LG executives said the affiliates were planning on continually increasing the amount of cash payments and encouraging a spill-over effect so that second- and third-tier suppliers receive similar benefits.

A more direct type of financial support in the form of loans for vendors is another area LG has been making headway in.

In September LG Group established a mutual growth fund for issuing low-interest, long-term loans to their vendors. As of March, LG has issued about 170 billion won in such loans to more than 300 of its suppliers.

Those who receive recommendations from LG affiliates can access the loans through the Industrial Bank of Korea.

“By expanding fund support to our suppliers, we hope to help those with high-end technology continue on in their research and development, especially those who are going through temporary rough patches,” one LG Group executive said. “Our goal is to get them through that patch so they can do more in the future.”

In October, LG opened a mutual growth center in a joint effort with the Industrial Bank of Korea ― the first of its kind ― through which it offers management and loan consulting services to suppliers and vendors.

One strong belief LG has is that it must work together with its suppliers on promoting environmentally friendly technology, a goal that the global corporate sector cannot afford to shun in the face of limited resources.

For that, LG has pledged to offer not only fund support, but get directly involved in promoting R&D and even purchasing the products developed by its smaller partners.

“We need to provide not only funds, but also provide R&D support and make our best effort to help out domestic providers develop parts and equipment so we can depend more on domestic vendors,” said LG Group chairman Koo Bon-moo.

At the end of last year LG held a technology fair with small and mid-sized companies at its R&D lab in southern Seoul.

LG selected a total of 17 smaller companies to support its R&D activities for promoting green-growth.

The firms selected will be developing technologies and products in eco-friendly areas such as solar batteries and health care.

LG will offer both technology and funding support for the chosen companies. LG also will later purchase the products developed based on its support.

In a similar vein, LG has pledged to help vendors develop equipment and parts so it can rely more on domestic sources.

LG Display, for instance, plans to increase its reliance on domestic suppliers for its LCD production lines to 80 percent from 60 percent.