That is the rallying cry Virginia Commonwealth University has adopted during its basketball team’s improbable nothing-to-lose, everything-to-gain run to the Final Four.

The Rams are having blast and their confidence is growing with each win.

“It comes from our personalities and coach (Shaka) Smart,” forward Bradford Burgess said. “He wants us to be out there loose and confident and aggressive. We’re out there playing with nothing to lose. It’s just been a fun ride and I think we showed how much fun we can have on the court every game.”

The urban university once viewed as a mostly commuter school has toppled some of the college game’s elite programs.

The Rams earned their way to this weekend’s semifinals in Houston with a 71-61 victory against mighty Kansas on Sunday in a game that rarely was as close as the final score.

The Jayhawks led 6-0 early, and the Rams didn’t flinch.

Smart, who has become one of the hottest names in coaching in only his second season, now boasts a 10-0 career record in postseason play; VCU went 5-0 to win the CBI last season.

But this year’s success seemed unlikely when they finished 3-5 in February, and showed up at the Colonial Athletic Association tournament thinking they had to win it to make the NCAA field.

Turns out they won just enough.

VCU used a buzzer-beater from Jamie Skeen in the quarterfinals to slip past Drexel, and then played one of their best games to oust regular season champion George Mason, 79-63.

Though they lost to Old Dominion in the championship, Smart sensed something different, and hearing their unexpected at-large bid blasted by commentators has only fueled their run. 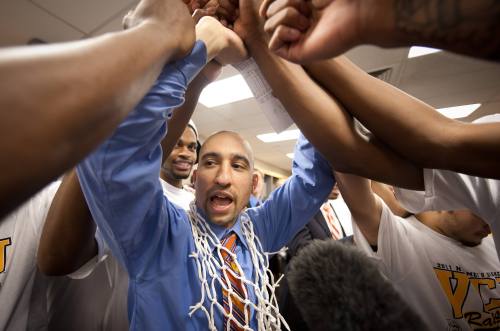 “We knew that we had turned the corner as a team and that we were playing much better,” Smart said, referring to the Rams’ win that ended George Mason’s 16-game winning streak. And though he was unsure if VCU would get in, Smart said the Rams “felt like if we got the opportunity to play in the NCAA tournament, we could certainly make a run.”

It is how they are doing it on that run that is really turning heads.

Only Florida State, beaten on Burgess’ layin with 7 seconds left in overtime, has been close against the Rams’ pressing defense and 43.8 percent postseason 3-point shooting.

Now, Burgess said, the Rams feel there is nothing they can’t do.

“As the wins kept coming, we’ve gained more confidence and we’ve just been saying, ‘We don’t want this ride to end,”’ he said. “Getting to Houston, why not try to go and win two games?”

The Rams (28-11) face Butler (27-9) in the semifinals on Saturday night. The Bulldogs lost to Duke in the national championship game last season, but the Rams won’t be intimidated.

“We just have a lot of belief in each other,” Rodriguez said. “We believe in our skills and whatever coach teaches us and we go out there and perform. We’re not scared of anybody.”

And the tournament has shown they don’t need to be afraid with the cast they bring:

Skeen, who transferred after two seasons at Wake Forest, was the most outstanding player of the Southwest regional after scoring 26 points against the Morris twins, Marcus or Markieff.

Rodriguez, the team’s steady, unquestioned leader, started his career playing alongside Eric Maynor ― now with the NBA’s Oklahoma Thunder ― for former VCU coach Anthony Grant. Rodriguez was so upset when Grant left for Alabama that he almost transferred.

Then there are Burgess and Brandon Rozzell, both Richmond products who have the ability to take over on offense with their outside scoring, but have impacted games besides scoring.

There’s Ed Nixon, the defensive stopper with a knack for making big shots.

And of course, there’s Smart, 33, who looks too young on the sidelines with his shaved head and discarded jacket to be in charge. However, he has masterfully manipulated his team’s air of confidence to motivate them with pointed reminders of how people doubted them.

“If we didn’t have a really confident group, that would be paralyzing because our guys would see that and think, ‘Oh no, maybe we can’t do that,”’ Smart said. “But I know with our group, that’s not a problem.”

Smart can use being disrespected to his advantage now, though he was weary of disappointment demoralizing his team when at-large bids were being announced.