Traces of radioactive material are being detected across the nation following a widening nuclear crisis in Japan, but the minuscule amounts pose no health risk, officials said Tuesday.

“Tiny doses of iodine 131 were detected at all 12 monitoring stations nationwide Monday. There were also traces of cesium 137 detected at the Chuncheon center,” Yun Choul-ho, president of the Korea Institute of Nuclear Safety, said during a news conference.

However, Yun made it clear that the radiation levels were extremely small and that the trend was repeated around the world.

“An unnecessary atomic scare is spawning among the public. Considering the current situation, there should be no change in people’s daily lives,” he said.

The disclosure came one day after the state-run nuclear regulator confirmed Monday that traces of xenon 133, another radioactive isotope, were discovered in Gangwon Province on March 23.

Because radioactive xenon does not exist in the air naturally, the KINS presumed that the material was released from the Fukushima Daiichi nuclear power plant in Japan, which was struck by a powerful earthquake and tsunami on March 11.

Like xenon, the nuclear regulator said that newly detected iodine and cesium reached the country on the prevailing westerly winds.

Further deepening public concerns over the dangers of nuclear leaks, the Japanese government announced Tuesday that highly toxic plutonium is seeping from the damaged nuclear plant into the soil outside. 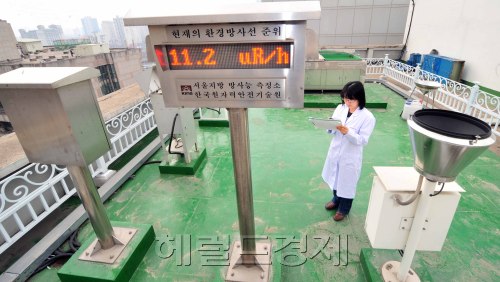 A researcher measures radioactivity levels Tuesday at a radiation monitoring station in Seoul. (Kim Myung-sub/The Korea Herald)
“Plutonium is a heavier isotope that does not blow far away,” said Yun, downplaying the possibility of the dangerous substance’s arrival any time soon in Korea.

“We can detect the material by testing samples. When necessary, the KINS will collect the samples for inspection.”

Some have compared the crisis to the 1986 Chernobyl nuclear disaster, but Yun said the two cases are “totally different.”

“Some contaminated coolant waters could flow into the sea in Japan’s case. But the total radiation amounts would not be larger than in the Chernobyl accident,” he said, adding it was his own opinion.

The Korean government has tightened its monitoring of radiation levels, conducting tests in 20 areas near the East and South Seas. It also decided to increase the current weekly check of air quality to every day.

In a recent simulation by the KINS, Korean people were to be exposed to 0.3 millisievert of radiation per year in the worst scenario following the nuclear crisis in Japan.

The radiation levels were 30 percent of the annually permissible exposure levels of 1 millisievert for ordinary people. The average amount of radiation workers at a nuclear plant are exposed to in a year is 20 to 100 millisieverts.

According to the KINS, an average Korean has received 0.0003 millisievert from normal background radiation over the past year. One-time X-ray exposure releases 0.3 to 1 millisieverts of radiation, it added.