The LePad ― powered by Google’s Android software ― was launched in China on Monday at a Chinese-media only event.

Lenovo will begin selling LePad directly to Chinese consumers this week through its own retail stores and it will put it on sale outside China by June, spokesman Jay Chen told Dow Jones Newswires.

The firm said in a statement that it was aggressively pursuing the mobile Internet device business and established a special division ― the Mobile Internet and Digital Home Business Group ― this year to better compete.

“The LePad is the first major launch since the business group’s founding, we are confident in it and will continue to enrich its product line with better performing products and a richer selection of styles,” Lenovo said. 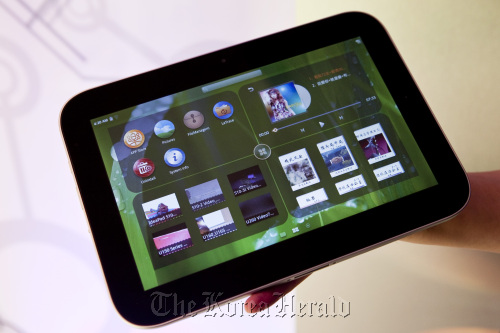 A Lenovo Group Ltd. LePad, a tablet computer is displayed during the 2011 International Consumer Electronics Show in Las Vegas. (Bloomberg)
In addition to the iPad, Lenovo’s new tablet will compete against gadgets from other major electronics companies such as Dell, Samsung Electronics and BlackBerry-maker Research In Motion.

LePad ― which was first unveiled in January at the Consumer Electronics Show in Las Vegas ― has a 10.1-inch color screen and connects to the Internet using Wi-Fi or 3G telecom services.

In China, models equipped with Wi-Fi wireless technology will carry a recommended price tag of 3,499 yuan ($533) for the 16-gigabyte version, the company said.

It did not say when it would go on sale, but pre-orders began on March 16.

Lenovo, which bought IBM’s PC business in 2004 for $1.25 billion, had roughly 27 percent of its home market last year and was ranked fourth in the world with a global share of about eight percent, according to data from IDC intelligence firm.

Apple sold 15 million iPads last year, generating $10 billion in revenue and establishing the multi-tasking device as a “must-have” consumer item for many.