With 100 days to go until the International Olympic Committee decides the host of the 2018 Winter Games, the PyeongChang bid committee signed an agreement with 23 companies for its “Best of Korea” initiative.

The scheme brings the country’s best entertainment and cultural opportunities to PyeongChang if the Gangwon Province city hosts the Winter Games.

Participating companies include some of the country’s leading restaurant and caf chains, such as CJ Food Ville, Sun at Food and Mr. Pizza. Also art and cultural institutions, including Sejong Center for the Performing Arts, HOAM art hall and Paik Nam-june art center, agreed to join the initiative.

The companies have agreed to run entertainment and hospitality amenities, such as restaurants, shops and concert halls in the region during the Olympics, according to the bid committee. 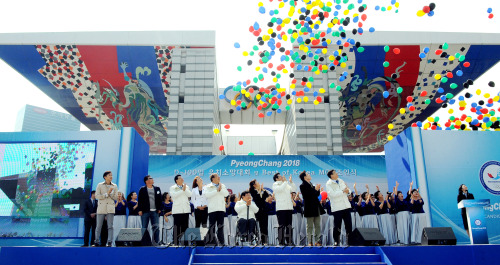 PyeongChang bid officials release balloons during a special ceremony at Olympic Park, Seoul, Monday. (Park Hyun-koo/The Korea Herald)
And now with the signing on Monday, there are 39 companies and 123 brands participating in the scheme.

Despite its two previous failures, PyeongChang is competing against Munich and Annecy, hoping that the third time will prove to be the charm.

Although PyeongChang is a popular winter resorts in Asia, it still lacks entertainment amenities compared with its two European competitors.

Cho Yang-ho, the PyeongChang 2018 bid chairman and CEO, however, said the “Best of Korea” initiative will help deliver an excellent cultural experience for Olympians and winter sports fans.

“The Best of Korea program will offer everyone visiting PyeongChang the beautiful mountains combined with excellent cultural and entertainment experiences during the Olympics,” Cho said.

On Monday, marking the 100-day countdown, the bid committee held a special ceremony at the Olympic Park in southern Seoul.

“Korean sports have a great potential to grow, but in order to help boost winter sports here, PyeongChang must host the Winter Games in 2018,” Park said. “I think so far our bid campaign has been successful, but the remaining three months will be crucial. We need the support of the whole nation.” Cho added.

The International Olympic Committee decides the host for the 2018 Winter Games in a secret ballot in Durban, South Africa, on July 6. Before that the three bidders will take part in Sport Accord from April 3-8 in London, then in the IOC presentation summit in Lausanne in May to make their final pitches.