BERLIN (AP) ― German chancellor Angela Merkel’s conservatives have suffered a historic defeat in a state ballot after almost six decades in power there, partial results showed Sunday, in an election that amounted to a referendum on the party’s stance on nuclear power.

The opposition anti-nuclear Greens doubled their voter share in Baden-Wuerttemberg state and seemed poised to win their first-ever state governorship, according to calculations based on partial results published by public broadcaster ARD.

“We have secured what amounts to an historic electoral victory,” the Greens’ leader Winfried Kretschmann told party members in Stuttgart.

The Greens secured 24 percent of the vote, with the center-left Social Democrats down 2 percentage points at 23.2 percent, giving them enough form a coalition government in the state, the results showed.

Representatives of all parties said the elections were overshadowed by Japan’s nuclear crisis, turning them into a popular vote on the country’s future use of nuclear power ― which a majority of Germans oppose as they view it as inherently dangerous.

Conservative governor Stefan Mappus, who has long been an advocate of nuclear energy, conceded defeat and said his party’s lead in the polls dwindled away in the wake of the disaster at Japan’s Fukushima nuclear facility.

“Voters were touched by the terrible events in Japan, those images still haunt people today,” he said.

Mappus’ Christian Democrats secured 39.5 percent of the vote and its coalition partner, the pro-business Free Democrats, saw its voter share halved to 5.1 percent ― just above the threshold to enter the state legislature, the partial results showed.

“It was a vote on the future of nuclear power,” he said.

The disaster in Japan triggered Merkel’s government last week to order a temporary shutdown of seven of the country’s older reactors, two of them in Baden-Wuerttemberg state, pending thorough safety investigations.

But the chancellor’s abrupt about-face decision has raised doubts about her credibility in a country that remembers well Ukraine’s 1986 Chernobyl disaster that spewed radiation across Europe. 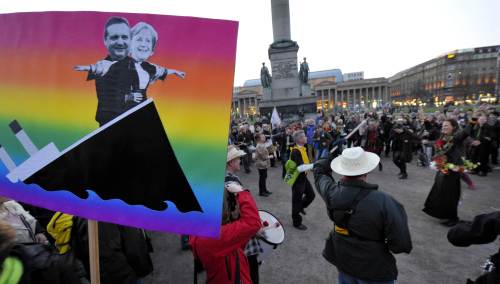 Green Party supporters dance in Castle Square in downtown Stuttgart, southern Germany on Sunday next to a poster showing German Chancellor Angela Merkel and the State Premier Stefan Mappus after the state elections in Baden-Wuerttemberg. (AFP-Yonhap News)
A center-left government a decade ago penned a plan to abandon the technology for good by 2021, but Merkel’s government last year amended it to extend the plants’ lifetime by an average of 12 years.

The government has now put that plan on hold, and the opposition wants to abolish the use of nuclear power by 2020 for good. Germany currently gets about a quarter of its energy from nuclear power, but plans to eventually replace it with renewable energies.

Merkel’s party has held power in the region around Stuttgart ― home to some 11 million people ― since 1953 and the ballot was seen as the most important of Germany’s seven state elections this year.

The prosperous southwestern state around Stuttgart with some 11 million inhabitants is home to carmakers Daimler AG, Porsche SE or software house SAP AG and it was the only state where the same center-right coalition that governs Germany had to face state voters.

The results in Baden-Wuerttemberg also further weaken Merkel’s coalition’s stance in Germany’s upper house of parliament, which represents the 17 states, increasingly forcing her to seek compromises to get major legislation passed.

Also voting Sunday was Rhineland-Palatinate state, where separate partial results published by ARD saw the Social Democrats remaining in power but forced to form a coalition government with the Greens.

Governor Kurt Beck’s Social Democrats fell 9.2 percentage points to 36.4 percent, while the Greens appeared to have more than doubled their vote, with 15.1 percent, according to the exit poll. The Christian Democrats are seen gaining 2.2 points to 35 percent.

Official results in both states are expected later Sunday.