[ The Korea Herald – Send E-mail ]
Nintendo ready to take 3-D gaming to mass market
By 이현주
Published : Mar 28, 2011 - 19:08
Updated : Mar 28, 2011 - 19:08
NEW YORK (AP) ― With the Nintendo 3DS, the Japanese video game company is betting that it can once again nudge mass entertainment in a new direction, just as it did nearly five years ago when it launched the Wii with its innovative motion-based controller.

This time, though, the competition from other devices is tougher.

The handheld 3DS, which goes on sale in the U.S. on Sunday for $250, lets users play 3-D games without wearing special glasses. It also takes 3-D photos. This summer, the 3DS will play 3-D movies streamed from Netflix on its 3.5-inch screen.

Nintendo’s handheld gaming systems have been wildly popular since the days of the Game Boy, but in recent years people have grown accustomed (and sometimes addicted) to playing games on their smartphones. “Angry Birds,” for example, is played by 40 million people a month. 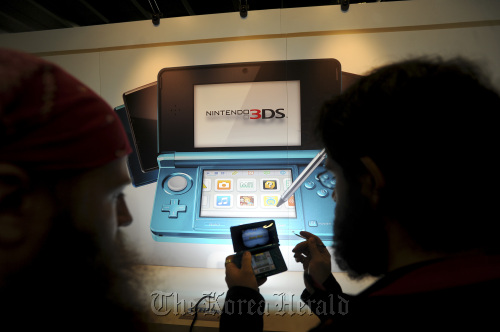 Fils-Aime acknowledges that consumers have a wide range of entertainment options. Nintendo, he says, must provide better entertainment experiences so that people keep flocking to its games and devices.

So far, they are. While demand for the handheld DS has slowed over the past year, video game analyst Jesse Divnich of Electronic Entertainment Design and Research said that’s only because people have been holding out for the 3DS. As of Dec. 31, Nintendo had sold about 145 million units of the DS in all its iterations worldwide. Divnich thinks demand for the 3DS will be more brisk during its first year on sale than for previous iterations, such as the DSi, which went on sale in 2008.