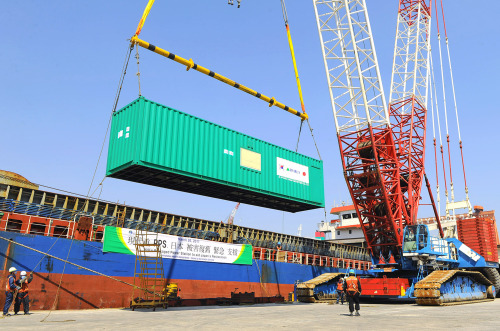 The packaged power stations, will help supply power to the cooling system at the Fukushima Daiichi nuclear plant and to nearby residential areas, the company said.

Each station can produce 1.7 megawatts of electricity and the combined output of the four is enough to support 26,000 people daily, according to company officials.

The decision was made after the firm’s biggest shareholder Rep. Chung Mong-joon of the governing Grand National Party suggested last week to Prime Minister Kim Hwang-sik that Hyundai was in a position to ship such equipment to Japan faster than other companies.

The firm said it will provide additional power stations if necessary.

Residents in northeastern Japan have faced power shortages due to the shutdown of some nuclear reactors at the Fukushima complex, following a spate of earthquakes and tsunami on March 11.

Tokyo Electric Power Co. and workers have been battling to put the plant under control amid mounting radiation fears.

Local officials estimate the shortfall in output at the nuclear facilities at up to 50 percent.

The nuclear industry accounts for slightly less than a third of Japan’s power needs.

Earlier, Hyundai donated 50 million yen ($616,000) to the Japanese Red Cross for disaster relief through its branch there.

“I convey our deepest sympathy to Japanese people on behalf of all Hyundai Heavy employees and do believe in Japanese people’s power and strength to recover from the damage soon,” Lee said.