TONGYEONG ― When the Salzburg Mozarteum Orchestra abruptly canceled its opening concert for the Tongyeong International Music Festival due to fear of radiation from Japan spreading to Korea, TIMF artistic director Alexander Liebreich said he was quite surprised and could not understand the decision.

Despite the short notice, he managed to invite all the other participating artists to hold the opening concert together and their spirit of togetherness on the stage actually turned the situation into a wonderful moment to offer condolences to victims of the quake disaster in Japan.

TIMF 2011 Spring Season kicked off on Saturday in Tongyeong, a small scenic port city in South Gyeongsang Province, just as the long-awaited spring was approaching.

Under the theme “Moving Dimension,” which was suggested by Libreich based on Yun I-sang’s 1971 work “Dimensionen,” the 2011 TIMF Season is to run through April 1, offering classical and contemporary music concerts, concerts for children, forums, lectures and master classes.

Yun studied and settled in West Germany in the 1960s. He was kidnapped by the South Korean police for alleged espionage and sentenced to life imprisonment. After seeking exile in West Germany in 1969, Yun was barred from entering Korea again.

The opening concert, “Alexander Liebreich & Good Friends,” was held at the Tongyeong Arts Center’s Main Hall at 7:30 p.m on Saturday.

It was a charity concert in which artistic director Liebreich, TIMF’s Artist in Residence soprano Suh Ye-ree, jazz vocalist Nah Youn-sun and veteran actress Yoon Seok-hwa, Ensemble TIMF and four members of the Munich Chamber Orchestra showcased a variety of music. The proceeds from the opening concert are to be donated to help victims hit by the earthquake in Japan.

After Liebreich made a short opening speech, Soprano Suh and pianist Willian Hong-chun Youn, who is the winner of 2008 Isang Yun Competition, appeared on stage first to perform Mahler’s “Des knaben Wunderhorn.”

Then, Liebreich invited actress Yoon Suk-hwa to briefly introduce the upcoming performance for children with the Asian Festival Ensemble in which she will narrate a story. 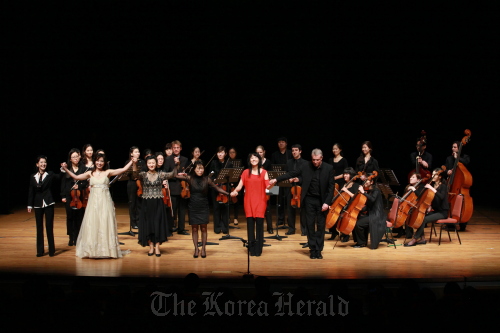 As Nah frequently holds concerts in Europe, Liebreich asked her European and the Korean audiences differed.

“Music is universal and transcends all boundaries such as national ones. But what I can surely say is that the Korean audience is the ‘hottest’ one in the world,” Nah told the audience.

Nah’s fast scat, sounding very different from one pitch to another, moved exactly in sync with the guitarist’s strokes.

Flying into Tongyeong just in time, violinist and contrabassist of the Munich Chamber Orchestra presented an excerpt of Yun I-sang’s “Together for Violin and Contrabass.”

Then, the Munich Chamber Orchestra and Ensemble TIMF performed Bela Bartok’s “Rumanian Folkdance” under conductor Liebreich. All standing except for cellists, the string musicians showed great energy and professionalism.

“During the festival, the most important thing we should focus on is the sprit of Yun I-sang, searching for great composers and giving a platform for new compositions,” said Liebreich, who is also conductor of the Munich Chamber Orchestra, at a press conference. He is TIMF’s first non-Korean artistic director, appointed in 2009. He brought Maurice Lausberg, managing director of German PR company Actori, to Tongyeong to promote TIMF to global corporate sponsors.

“The second important thing for the festival is to have an East-West residence system, not only in concerts but also in lectures. It will be an interesting encounter.”

The encounter of Eastern composer Chin Un-suk and German composer Heiner Goebbels will take place Monday at 2 p.m. at the Tongyeong Arts Center. Korean soprano Suh Ye-ree and Russian pianist Igor Levit will perform on Tuesday at 7:30 p.m. at the same venue.

Goebels and the Hilliard Ensemble will showcase an avant-garde stage “I Went to the House but did not Enter” on Thursday and Friday at 7:30 p.m. and 5 p.m., respectively.