[ The Korea Herald – Send E-mail ]
Jaguar gives special tributes to the legendary E-Type
By 최희석
Published : Mar 27, 2011 - 19:20
Updated : Mar 27, 2011 - 19:20
HAMBURG, Germany (DPA) ― The Jaguar E-Type is arguably one of the most beautiful cars ever built, stunning the motoring world when it was unveiled at the Geneva Motor Show 50 years ago with its sleek aerodynamic form and racing car engine.

“It’s impossible to overstate the impact the E-Type had when it was unveiled,” said Jaguar’s current design director Ian Callum at this month’s show in Geneva. He added that the design set a standard that will always be associated with Jaguar but that it was a burden at the same time because “I will never be able to do anything quite like it.”

Jaguar is celebrating the anniversary throughout the year with special tributes to the E-Type at Goodwood’s Revival and Festival of Speed, the Pebble Beach Concours d’Elegance, the Nuerburgring Old Timer Grand Prix and many other events worldwide.

The first Series 1 cars built between 1961-1968. Today these first convertibles are valuable collector’s items that fetch record prices at classic car auctions at around 100,000 euros ($140,000). It is the unspoiled original design details such as the covered glass headlights and elliptical front grille that has its fans swooning.

The later models had to be adapted to stringent U.S. safety regulations such as big bumpers and open round headlights, tainting the original pure design lines. 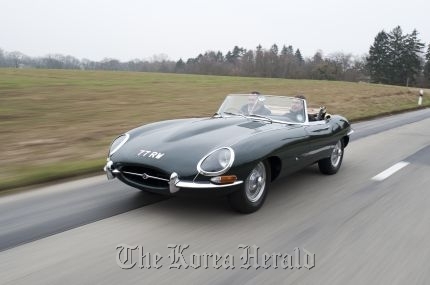 Jaguar E-Type
“In its purest form it was an incredibly beautiful car. Its lines were so clean. It revolutionized motoring and everyone wanted one,” according to a racing driver of the time, Jackie Stewart.

The E-Type was the successor to the C-Type and D-Type Jaguar racing cars that dominated the 24 hour Le Mans in the 1950s. The car had a light chassis, disc brakes and an in-line six cylinder engine that had proved its mettle on the track.

The aerodynamic design stems from Malcolm Sayer, who had worked for the Bristol Aeroplane Company in World War II, and who also designed the C-Type and D-Type. According to legend, Sayer was so talented that he could draw the optimal aerodynamic shape of a car to within a thousandth of an inch - and that in an age without the wind tunnel technology of today.

With an output of 265 hp and a top speed of 240 km/h the Jaguar E-Type was in the super car category of its time but cost only a fraction of a Ferrari at around 4,000 euros ($5,600), making it an object of desire among the stars of the sports, music and film industry of the time.

It was only some years later in the Series II (1968-1971) that the E-Type became more refined with such modern features as power steering, air-conditioning and reclining seats.

The last Series III V-12 built between 1971-1974 could be identified with its large cross-slatted front grille, big bumpers and V12 badge at the rear. These are the most affordable of the E-Types today on the classic car market with neat examples selling for between 30,000 and 35,000 euros.

Many a car designer has tried to copy from the E-Type, and Jaguar itself tried to revive the nostalgia with the launch of the XK8 in1996, taking some of the front grille design cues. It was never able to pick up where the E-Type left.

The latest revival plans come from the Swedish design team Visualtech. It will not be called an E-Type but the Growler E. Powered by a 5.0-liter 600 hp supercharged V8 from the Jaguar XK-R, production is planned for about half a dozen units a year.

It will take six months of hand built craftsmanship to complete each car which of course drives up the price to between 500,000 euros ($700,000) and a million euros.