[ The Korea Herald – Send E-mail ]
Film focuses on remote Uzbek museum at odds with politics
By 이다영
Published : Mar 25, 2011 - 18:32
Updated : Mar 25, 2011 - 18:32
Back in 2000, University of Southern California film professor Amanda Pope and a former student, Tchavdar Georgiev, were traveling in Russia and some of its satellites, working on a series of short portraits of emerging leaders in the post-Soviet world. The two were in Uzbekistan when Pope heard about an amazing collection of Russian avant-garde art in a remote museum deep in the country’s desert.

But when she excitedly mentioned it to Georgiev, a native of Ukraine who speaks fluent Russian, he was skeptical. “I said, ‘Amanda, what were you having to drink last night?’” recalled Georgiev. “There is nothing of value in the desert.”

Two weeks later, they were at a Moscow flea market. “There was this shady salesman who sold all of these rare books,” Georgiev said. Not impressed with his offerings, Georgiev said he challenged the dealer to “show us something we have never seen. He pulled out this very rare book that was written about the museum. Our jaws dropped. I said, ‘Amanda, as usual, you are right.’”

Eleven years after that fateful encounter at the flea market, the duo’s documentary, “The Desert of Forbidden Art,” opened Friday in Beverly Hills. (An edited version of the documentary will air April 5 on PBS’ “Independent Lens.”) The film centers on the life and legacy of a frustrated painter, Igor Savitsky, who managed to save a giant trove of avant-garde art after authorities began denouncing such works and pushing Socialist Realism starting under Stalin.

Savitsky, an archaeologist in western Uzbekistan, then part of the Soviet Union, had started to collect ethnic artifacts. Using his charm, he managed to persuade Soviet officials to provide funding for a museum in the remote Uzbek city of Nukus.

Pretending to buy state-approved art, Savitsky instead purchased works by artists who were banned by Stalin’s regime for being gay, speaking out against the government or refusing to paint in the style approved by the authorities. He died in 1984, leaving the Karakalpakstan State Museum of Art in Nukus with the second-largest collection of Russian avant-garde art after the Russian Museum in St. Petersburg.

Pope and Georgiev believed their film would be a force for good for the museum and Uzbekistan, shining a light on its rich heritage and perhaps attracting new support for conservation and restoration.

But the reality has been far more complex, tangled up in the intricacies of contemporary Uzbek politics. The museum’s director, Marinika Babanazarova, who was appointed by Savitsky, was forbidden to come to Washington, D.C., in October for the film’s premiere at the National Gallery. “We were thinking this would be an incredible event to promote Uzbek culture and the treasures that they have,” Georgiev said. “Apparently, the government didn’t think so.” 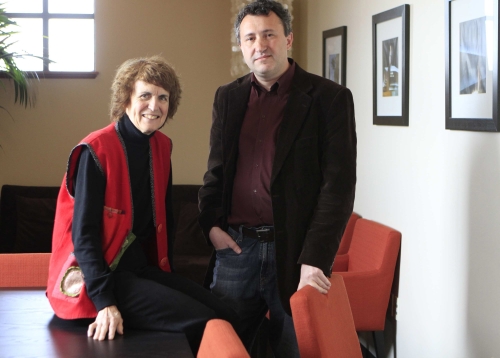 Amanda Pope (left) and Tchavdar Georgiev, pictured March 7, directed the documentary, “The Desert of Forbidden Art.” (Kirk McKoy/Los Angeles Times/MCT)
Shortly after that, the Uzbek government condemned the original museum building, constructed in 1966, and announced plans to build a bank on the site. The original museum structure stored the majority of the paintings; another building, erected in 2003, is where a small portion of the collection (about 3 percent) is on view.

“Without any warning when Marinika was away on business, they brought these buses to the museum and took the paintings and put all of the paintings in the new building in the hallways,” Georgiev said. “The problem is that is no restoration work going on and there are no plans for building an annex, and they are constantly harassing her with commissions that come from the capital looking for something wrong with the museum.”

Babanazarova’s health has suffered under the pressure, the filmmakers said. “She’s really feeling the strain,” Pope said. “And the government can say, ‘Her health is so compromised we will have to replace her.’”

Pope said Uzbek authorities don’t want a lot of the artwork to be shown because the “Ministry of Culture feels they don’t want anything to remind them of the time when Uzbekistan was part of the Soviet Union.” As an example, she cited one painting that depicts two men having tea; in the background is a portrait of Lenin.

Pope also worries that the paintings, many of which are now lining the halls of the museum, are “susceptible for disappearing for one reason or another.” Islamic fundamentalists have also complained about some of the art, say the filmmakers.

“We want the film to bring international attention to the collection and scrutiny to their conditions,” Pope said. “On the other hand, we don’t want to do anything that jeopardizes Marinika more than she is. We are in regular telephone contact with her. What we want is to encourage the progressive forces in Uzbekistan to shift their thinking about this collection; along with the Bukhara and the Silk Road cities, this could be a major tourist attraction.”

Pope said that at every screening of the film, audience members have inquired about how to visit the museum. “If you translate that into a welcoming attitude, it could be fabulous not only for Nukus but for the tourism of the country,” she said. “That is what we wanted.”

The filmmakers’ unease over the situation in Uzbekistan is leavened a bit by the knowledge that all the material gathered for the documentary, including 90 hours of film, will be housed at USC’s Institute of Modern Russian Culture for use by researchers.

“It will be available for scholars in a way the Nukus materials really aren’t,” Pope said, “because Nukus is so remote and relatively difficult to get to.”