The Royals trailed 4-0 before scoring nine straight runs, including five in the sixth. Pedro Feliz added a pair of RBI doubles and Bruce Chen gave up four runs on five hits in six innings.

Seattle scored four runs in the bottom of the third highlighted by three third-inning doubles, and four more in the ninth keyed by Saunders’ two-run shot.

Righthander Doug Fister struggled in the last three innings of his start and gave up six runs on seven hits, walking three in six innings.

Hamels has struggled in the latter half of spring training. After allowing a total of three earned runs in his first three starts, he has given up 16 runs in his last three. 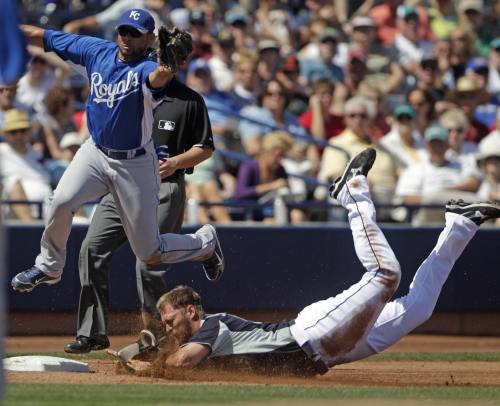 Young hit s three-run home in the fifth off Hamels.

SCOTTSDALE, Arizona (AP) ― Tyson Ross is making it hard on his manager.

Bob Geren needs to pick a fifth starter, and Ross hasn’t done anything to eliminate himself from consideration.

Well, almost anything. He did finally give up a run on Thursday, in another stellar outing in Oakland’s 15-7 win over Arizona.

“He’s throwing the ball well,” Geren said. “He was so efficient today.”

“I liked the command of his fastball,” Geren said. “That’s the key to his success. The velocity and movement is always there.”

Kurt Suzuki and David DeJesus each had three RBIs and Kevin Kouzmanoff hit a solo home run and added an RBI single for Oakland.

Ross is in contention with Brandon McCarthy and Bobby Cramer. McCarthy has a 3.05 ERA, 14 strikeouts and zero walks in 20 2-3 innings this spring. Cramer has an 8.25 ERA with five strikeouts and four walks in 12 innings.