[ The Korea Herald – Send E-mail ]
How bacon sizzled and people got sweet on cupcakes
By 김후란
Published : Mar 23, 2011 - 18:41
Updated : Mar 23, 2011 - 18:41
NEW YORK, New York (AP) ―Bacon. It’s everywhere. U.S. fast food chain Wendy’s features it in the “Baconator” and Paula Deen crumbles it into quiche. Ditto for those deluxe cupcakes top-heavy with frosting. Is there a bakery or supermarket that doesn’t sell them?

Bacon and cupcakes ― like sliders, bubble tea, popsicles, food trucks and chipotle ― have caught on from coast to coast.

Food fads don’t always spread exactly the same way as other types of pop culture, such as fashion and music. Chefs don’t walk the runway at food shows holding up this spring’s hot Pad Thai dish.

There are no authoritative top-ten charts for food that show red velvet cake is No.1 with a bullet.

But favored foods items can go viral in the time it takes to upload a picture of salted caramel ice cream. The arbiters of trendy tastes include big-name chefs, bloggers, urban hipsters, eater tweeters and journalists. Usually, they work in some hard-to-quantify combination.

“It’s kind of like trying to grab a jellyfish, in terms of trying to understand it,” said Ted Allen, host of the Food Network’s “Chopped.”

Food fads are older than the fondue pot in the back of your parents’ pantry. But the lines of dissemination were easier to track before the existence of the Food Network and the Web. The high-brow authority was Gourmet magazine. Home cooks took cues from cookbooks and friends. There were just a few famous culinary authorities, like Martha Stewart or Paul Prudhomme, who helped popularize Louisiana cuisine.

Top-down authorities live on in the food world, even if they now share the stage with the cyber-masses. Serious eaters still are influenced by the magazines like Food & Wine and Bon Appetit. But the rise of food TV has dramatically multiplied the number of celebrity cooks who can popularize a food item. Think of what Rachael Ray did for extra-virgin olive oil, or what Bobby Flay did for grilling. 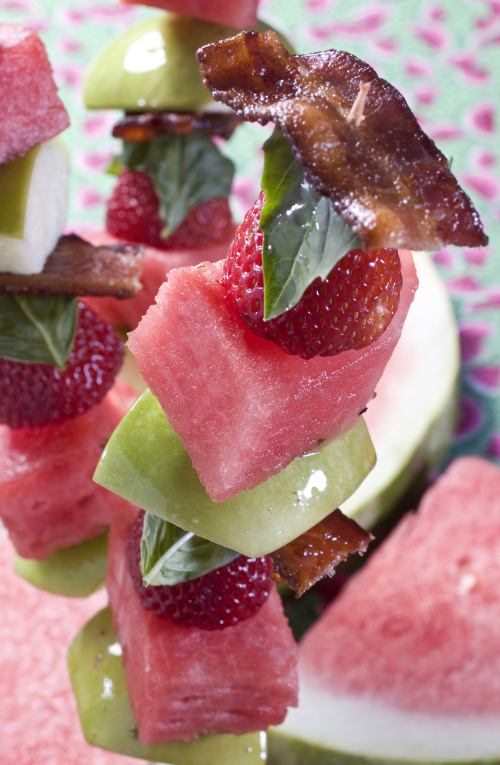 Watermelon salad with basil and bacon in Concord, New Hampshire.  (AP)
Television is widely believed to have kick started the long-running cupcake craze, though celebrity chefs had nothing to do with it. Credit here goes to Carrie Bradshaw and her pals on “Sex in the City,” who treated themselves to the luxurious cupcakes at Manhattan’s Magnolia Bakery. Mainstream and social media took it from there.

The obvious difference now is how food blogs and food-centric websites offer more possible trends at a faster rate, whether it’s Epicurious listing “16 Restaurants that count” or a contributor posting a picture of tuna tartare on Foodspotting.

The rules have changed dramatically and you can get something going very quickly.”

Trucks serving burgers or gyros a have become as ubiquitous as package delivery vans in downtown neighborhoods from Miami to Milwaukee.

The same media dynamic helped spread the word on “incubator cities,” those trend-setting places with a nucleus of creative chefs and adventurous young eaters like Seattle, Portland, Oregon, Austin, Texas, and Oakland, California.

“You know how somewhat spontaneously music scenes spring up in Athens, Georgia or Seattle, Washington?” asked Jane Goldman, editor-in-chief of CHOW.com. “It’s the same with a food scene in a place where rent is cheap and people who want to be creative and have the freedom ― because they don’t have to worry about making the rent.”

But while food hipsters may have moved beyond bacon, America has not. Chain restaurants serve everything from bacon-wrapped sea scallops to bacon club chalupas.

And perhaps it was simply inevitable, but there also are recipes online for bacon cupcakes.

“Bacon is one of the greatest things that was ever invented,” said Allen. “I think what has peaked is us discussing that fact.”