The detailed and embellished ballet flats, sandals and peep-toes have been elevated to become a serious alternative to the high heels that some women still feel are needed for dressy or business occasions.

In fact, the flat-shoe shape might be a better complement to this year’s longer, more languid fashion silhouette.

“Flats are one of the cool ways to wear spring outfits,” says Paola Venturi, creative director of Via Spiga. “I like to see a bronze-colored T-strap in a with a dress in a bright color ― maybe a carrot or tomato red ― and I love a graphic-print, black-and-white dress with a granite version. For the ‘70s influence that’s everywhere, I think a thong is really sophisticated.”

She sees a peasant blouse, wide-leg trousers and thong with rhinestones, influenced by vintage belts she found in an Italian marketplace, in her future. The jewel details “makes it feel like a city shoe,” Venturi explains. “It’s not a casual pair of flip-flops.”

The shorter shoe “grounds” the outfit, Dupont explains. The shoe doesn’t have to be completely, perfectly flat, but a shoe with just a bit of heel creates an easy line from the leg, she says, and, if there’s an ankle strap, you’ve just ramped up the sex appeal.

Even Jimmy Choo, a brand synonymous with strappy stilettos, has several flat options, including a zip-back sandal “perfect for lazy days spent poolside,” according to its website, and a glamorous, beaded tribal-style option.

While company co-founder Tamara Mellon is always photographed in heels, flats are an equal partner in her wardrobe. That’s what she wears for the “every days,” when she’s going to the office or on an errand with her daughter. 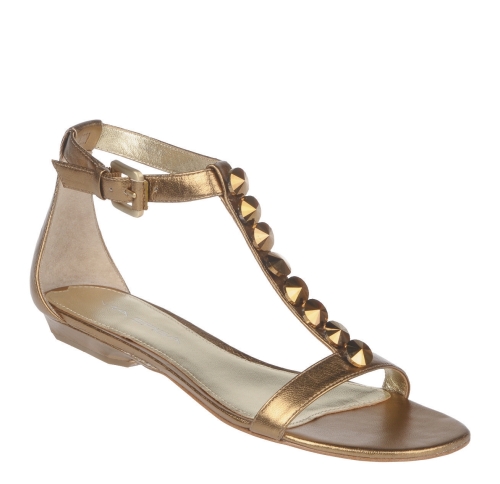 Via Spiga’s Dublin shoe. AP-Yonhap News
The flat shoe is a safer place to introduce some of the bold, bright colors that are another must-have for spring. Just a swath of yellow, blue or violet across the band of a sandal is an easier adjustment for the eye than four inches of that color on a heel.

“Flats give you a chance to play ― whether they are pointy at the toe or they’re a Mary-Jane style, but personally I would play with color,” says Alexandra Wilkis Wilson, chief merchandising officer. 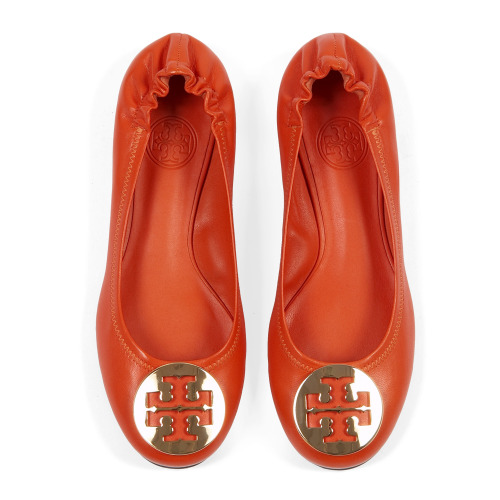 Reva flat by Tory Burch
In styling their fashion shoots, she says Gilt will use patent leather or embellishment to make a daytime outfit dressier, but cocktail or evening looks usually get a metallic leather.

Michelle Obama and Carla Bruni-Sarkozy can be role models for fashionable flats ― and Katie Holmes, too. Maybe these tall women are the ones who’ve helped bring low heels back into the zeitgeist.

“They bring a broad awareness to anything they wear,” says stylist Robert Verdi. “They’ve OK’d the shorter heel and put their stamp of approval on it.”

With a skirt or skinny-leg pants, heel height and wearer’s height don’t matter, says Dupont, but with a fuller trouser, a tall frame helps. (Her hint for the more petite set is a platform.)

“The shoes had been getting crazy high ― unbearable,” says Kelly Golden, owner of the Chicago-area boutique Neapolitan, who reports selling many pairs of platform-style flats even before the snow had melted. A Derek Lam version was the first shoe she’s ever sold out of.

“People are happy to see lower-heel options,” she says.

Still, says Verdi, women need to realize when and where flats are the right choice ― and not rule out heels.

“Women feel incredibly sexy when they wear heels, not because of the heels themselves but women feel confident in them. They’re an empowering tool,” he says. “But heels aren’t for the grocery store ― this isn’t ‘Sex and the City.’ You’re not wearing high, high heels in the most ordinary places of life, but you don’t have to sacrifice style.”

He adds: “The flat shoe, not a sneaker, says I’m put together. ‘It’s that middle ground where you need to be most days.”