In an autobiography, the scandal-hit woman discloses her side of the story and mentions high-prifile figures involved 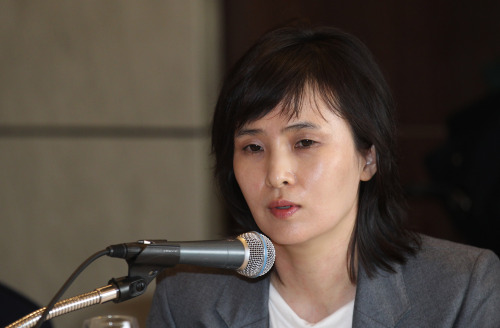 The woman at the center of one of South Korea’s biggest scandals returned with an autobiography that includes accounts of her meetings with former Prime Minister Chung Un-chan and former President Roh Moo-hyun.

Shin Jeong-ah, who shook the nation in 2007 when the fabrication of her academic record, embezzlement and an affair with a high-level government official were revealed, appeared in public for the first time Tuesday with her book “4001” at a press conference at Lotte Hotel in Sogong-dong, central Seoul.

She wrote that Chung said he liked her, that she was such a lovable girl that he would like to see her often. She added that he usually asked to meet in the late evening and sometimes touched her as he talked. When reporters asked for details, she said that she cannot say more than the things she already revealed in the book, but said some parts of the story were edited after the lawyer examined them in legal aspects.

The book is already creating controversies as it reveals actual names of the university presidents, professors, current members of the National Assembly and journalists who had various relationships with Shin.

“It could hurt the people involved, but I could not help but mention their names because if I don’t, my past four years become nothing. We changed some names into initials after my lawyer examined the book,” said Shin.

Shin also hinted in the book that former President Roh seemed to have been interested in her, all the while expressing that she is very sorry and cautious about mentioning President Roh because he is no longer alive.

The book discloses names of journalists who Shin wrote she was close with but later “betrayed” her by writing badly about her after the scandal broke out, and “C,” who she accuses of having sexually harassed her.

The reporter identified as “C” in the book was a reporter at the Chosun Ilbo at the time but is known to currently be a member of the National Assembly.

“I am reading the book now and it is a malicious lie. I am going to take legal actions. It is ridiculous and I do not know why she wrote it. It is all based on her imagination,” “C” told Herald Business.

Shin, however, said earlier that her lawyer examined the details for several months and that she thinks the stories will bring no legal problems.

“This book contains my story of the past four years starting from July 16, 2007, when I landed in New York. I spent one year and a half in jail but I think I have been living as prisoner 4001 until now. I think of today as the day I am parting with 4001. It will be the day I start to be a new Shin Jeong-ah, which will certainly be different from the Shin Jeong-ah before,” said Shin, calmly.

“The media was writing about ‘the people behind’ me, naming those who I trusted and had trusted me and encouraged me. Seeing the media name even those I do not know, I thought it would be impossible for me to lead a career. So I wrote their names and stories, to show how humane and genuine our relationships were. I just wrote a part of what was true.”

Shin, the former Dongguk University professor and art curator, served an 18-month term and was released on bail in April 2009. She was convicted of fabricating a doctoral degree from Yale University and embezzling funds from Seongkok Art Museum where she worked from 2002 to 2007. She was also ordered to compensate 129 million won ($114,993) to the art museum.

She also made headlines at the time with the scandal involving Byeon Yang-kyoon, a former presidential policy planner with whom she had affairs with and had supported her in many ways. Byeon was convicted of professional misconduct received a one-year prison term, suspension for two years and a 160-hour social service order.

Shin admitted her faults regarding what turned out to be a forgery of her academic career, but said that she did not fabricate anything. In her book, she writes: Although it might be meager, I did make efforts (to earn the degree) so my rubbish philosophy was that it is of a totally different level compared to degrees that are simply purchased.

“I am not denying that it is my fault. But what I want to correct is that although it was wrong to have someone help me regarding the fabrication of the degree, I did not forge it. I cannot say much during the trial so I only wrote the parts I could in the book, but more stories will come out when the lawsuit closes in two or three months. Then I will have an opportunity to speak more about it,” said Shin. Ahn added that facts that support her assertion are included in the book.

The lawsuit between Yale University and Dongguk University regarding Shin’s false doctorate is ongoing.

Regarding the detailed dating scenes with Byeon in the book, Shin said she just wanted to show what it was really like.

“I mulled over whether it would be appropriate to include the story in the book or not. But so many stories about us came out, those I cannot even imagine. I figured it would be too pathetic to hide the story now. So I just decided to show everyone what had really happened and then be reproved or self-reflect. Though it may not be an appropriate relationship, I thought this would be a better way to encourage each other and start a new life,” said Shin.

Shin burst into tears when she talked about the painting, “Longing for Love,” on the book cover. She painted it while she was an art student at the University of Kansas, thinking about the pink dress her father had given to her as a present.

“I painted it after my father passed away in 1994. He is still the one who makes my heart ache the most and who I am most sorry to. That is why I put it on the cover,” said Shin.

Shin also confessed that she is suffering from a victim mentality after the Munhwa Ilbo printed nude photos it claimed to be Shin’s.

“I was not so embarrassed when the photo first came out. My job was to respect the creativity of artists, so I thought it was possible to make such a photo. But as it led to ‘sex lobby’ issues, it became my complex. I could not contact my family or meet my friends. No matter how open-minded the society has gotten, it was so shameful and dishonorable, as a woman, to have everything lay bare,” said Shin.

Shin said that she felt uncomfortable about MBC’s soon-to-air TV drama “Goodbye Miss Ripley” which is based on Shin’s story but said she will watch it.

“It might seem to you that the time I suffered was far from enough, but I really desperately held out. I still agonize about what I would be able to do for a living. The case was so big in the art scene, and I have never thought of going back. If there is a good position somewhere, please let me know and I will really do my best,” said Shin.

But an aide to Chung called Shin’s claim “groundless,” adding that the former prime minister would not even be making an official reaction over the issue.

“Shin’s claim is nothing but an attempt to promote and sell her book,” the unnamed aide told the local media. “The claim is groundless and not even worth a reply.”