Most Seoulites have had exposure to a foreigner in one way or another, but many are oblivious to the efforts of expatriate communities to make this a better place to live.

Seoul is a global city, home to roughly 262,900 registered foreigners from some 160 countries, but to many even the term “foreigner” has negative connotations, automatically ostracizing those it describes from society.

So a Canadian-Korean expat is setting out to reveal the side of “non-Koreans” ― the term that he uses in place of “foreigners” ― the media does not show, and their contributions to their newfound home.

Born and raised in Toronto, James Lee is using his passion for film and his innate curiosity about others to bring foreign and Korean communities together, through FOB in Seoul.

The project will feature a mini documentary each month, profiling “non-Koreans” contributing to Korean society, either culturally or economically.

“Part of this (the project) is to just update the face of Seoul,” Lee told The Korea Herald, explaining that the project’s title came from his own sense of feeling different from Koreans. FOB, or fresh off the boat, is a term commonly used in North America to refer to Asian immigrants.

Yet the scope of his topics seems to suggest something more: possibly to show the true face of multiculturalism that exists beyond government PR of families with foreign brides and the Korean media’s sometimes offensive portrayals of native English teachers.

“It’s not the stereotype of people coming and taking money from Koreans and sleeping with Korean women sort of thing, but it’s the people who choose to live here and contribute,” said the 29-year-old.

“There are positive things that are going on in all non-Korean communities. A lot of people are choosing to make this their home and they want to make it the best they can.”

Through an honest portrayal of these foreign communities contributing to Seoul, Lee hopes that its native residents will view foreigners in a positive light, saying that “these people are helping us.”

After four years in Korea, many of Lee’s original friends had left, and as his world became “a lot more Korean,” Lee thought the expat community would always be simply transient.

But through a film competition, Lee quickly realized that there were a lot of foreigners in Korea for the long haul.

“I forgot that there were so many people in Korea doing a lot of cool stuff,” he said.

“So I thought someone’s got to be documenting these events, interesting people and stories,” said the film school graduate.

Lee was also exhausted by the one-sided portrayals of the foreign community in the media. 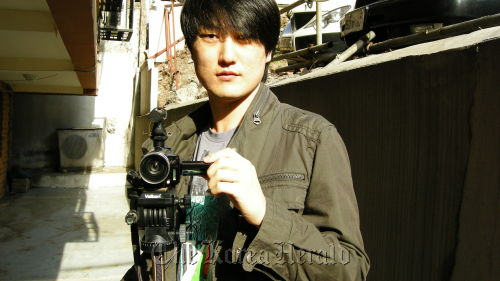 James Lee uses his background in film to share the real multicultural side of Seoul.(James Lee)
“The Korean media doesn’t really show the positive stuff that the non-Korean community is doing,” said Lee.

“I think that’s a huge misrepresentation of the non-Korean community.”

Through his videos, Lee also seeks to challenge the importance society places on pure-blooded Koreans, a legacy of ethnic nationalism that rose during the Japanese occupation and blocks the path of multicultural families even today.

“I’m just kind of against that concept, its not true and I think just that kind of old-school mentality is more harmful than helpful,” said Lee.

Lee’s attitude towards multiculturalism was shaped by his experiences growing up in Toronto.

So with FOB in Seoul partner, Andrew Bailey, he launched a pilot on Korea on the Rocks Initiatives, a group of foreigners taking responsibility and giving back to the Korean climbing community.

The pilot flows like a good book, compelling those watching to almost go out and join the initiatives themselves, which was Lee’s goal.

So although originally intended for the expat community, Lee found an overwhelming interest in his project from Koreans around him.

Thisistruestory is a Korean social funding platform for startup projects.

Lee had a number of Koreans on thisistruestory asking for more information on the KOTRi, after watching his pilot.

Lee plans to continue sharing the stories of those who give back to Seoul, including a volunteer English teaching group for underprivileged children among other topics.