The decision to keep Kim in the next episode breaks the rules of the show.

The show, “I Am A Singer,” pits a total of seven real-life, big-name singers in Korea ― Kim Gun-mo, Baek Ji-young, Yoon Do-hyun, Kim Bum-soo, Lee So-ra, Park Jung-hyun, and Jung Yeob ― against each other.

For each episode, the participants are given a special mission to perform in front of a 500-member audience who are made of ordinary viewers.

The audience members then vote to decide who should be eliminated.

For Sunday’s episode, the participants were assigned to sing popular tunes from the 1980s. Kim Gun-mo, who sang “Wearing Dark Lipstick” by Im Joo-ri, received the lowest number of votes among the seven participants. 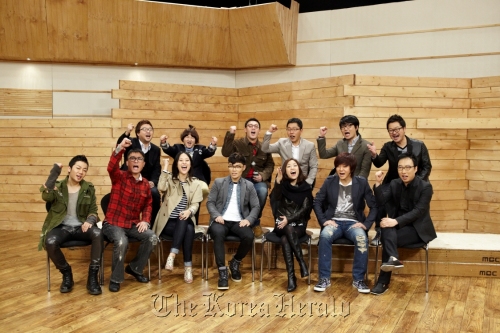 Participants and hosts of MBC’s singer survival program, “I am a Singer.” (MBC)
According to the show’s rules, Kim, who has almost 20 years of experience in Korea’s popular music scene, should have been eliminated.

Yet he was given a sudden and surprising offer to remain in the competition. Kim accepted the offer to stay, which enraged many viewers nationwide.

After the episode was broadcast Sunday, more than 2,000 angry online entries were posted on the show’s website.

“The show wasted my time,” wrote a netizen named Kim Byeong-cheol.“I waited to find out who gets eliminated.”

“This is a survival show,” wrote another netizen named Jeong Gwan-sik. “It makes no sense to not eliminate anyone in the first round. We viewers should boycott this show.”

Some said the reason why Kim wasn’t eliminated was because his musical career has been longer than that of most other participants.

“Would they have done the same if it wasn’t Kim who received the lowest number of votes?” wrote netizen Kim Chang-yul. “Kim should accept the audience members’ decision and leave the show.”

“It’s bitter to witness (the show’s) decision to ignore the audience members’ decision and allow the participating singer to decide,” she wrote.