No matter how much blockbuster musicals boast of their leading stars, or how low and lewd some small theater shows become in a quest for custom, there remain several decent small-stage musicals that are long-running successes.

South Korean original musicals such as: “Finding Kim Jong-wook;” “Sarangun Birultago,” or “Love in the Rain;” “Bbalae,” or “Laundry;” and “While You Were Sleeping,” are some of those still showing in Seoul’s small theaters to have touched audiences’ hearts for a long time.

There were hardly any empty seats at Daehangno Art Madang, the theater staging “Finding Kim Jong-wook,” last Thursday. Though this was expected for the much talked-about piece, such a packed theater on a weekday evening was still an impressive sight.

“Tickets for weekend shows are almost always sold out. On weekdays, an average of about 83 percent of the tickets is sold. Many come to see the play more than once, not just twice or three times but about ten times in some cases,” said Story P’s Song Myeong-hee.

The romantic comedy musical tells a bubbly story about a girl who seeks her first love, who she met during a trip to India seven years ago, and a guy who opens a first-love search company after getting fired from his job.

Knowing just which buttons to push to make viewers reminisce about their own first loves, the musical soon became something of an archetype for Korean romantic comedy. It was made into a movie, “Finding Mr. Destiny,” in December 2010, starring heartthrob Gong Yoo and actress Im Soo-jeong. An exclusive theater for the play opened in Gangnam in southern Seoul last year.

“Everyone has memories about first love, so anyone can easily relate to the story. We see that as one of the reasons why the musical is so loved,” said Song.

Indeed, an accessible story is key to becoming a long-running musical, especially in the case of small-stage performances where the audience is very close to the action.

It also does the trick for “Love in the Rain,” which has been running for 17 years. The story is about two brothers who meet after being separated for seven years. The brothers, who have contrasting personalities and live totally opposite lives, cannot stand each other but also love each other. 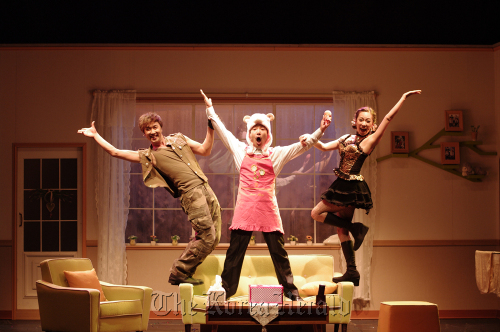 A scene from “Love in the Rain.” (MMusical Company)
“Keeping the old story is the charm. It is probably because love between family members remains unchanged despite the passage of time ― it was like that 17 years ago and it still is. That is why I keep the story simple, old and the same,” said Oh Eun-hee, writer of the musical at a press call held earlier this month.

The musical still draws a good-size audience, perhaps more than the few previous years because this year is the last run. It will end its long journey on May 29 after marking its 4,000th performance somewhere between May 1 and 5.

It is, however, still necessary to make some timely changes to the details so that the audiences of today can better relate to the story, Oh said.

“For the premier run in 1995, the focus was on deeply moving the audience. They all cried on their way out. After the IMF (Asian financial crisis), I inserted comical bits and sorted out gloomy elements. These days, youth unemployment is such a big issue and young visitors seem to relate well to the character Yoo Miri who gets fired the day after she was hired,” said Oh.

Showbiz insiders note that spicing up the show with witty supporting characters and events is another necessary factor for making a hit musical.

In “Finding Kim Jong-wook,” for example, the chameleon-like “multi-man” who transforms into 22 totally different characters during the 110 minute-long show, is the key entertainer. He thrills the audience with his unbelievably quick and perfect transformations ― he disappears and comes back on stage in what seems to be a split second, dressed up, for example, as a happy taxi driver, a weird Korean-Indian tour guide, a materialistic former girlfriend, or a rigid colonel/father. 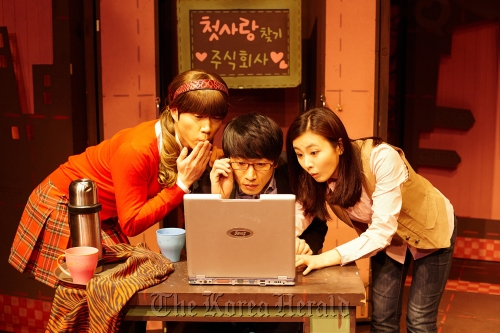 A scene from “Finding Kim Jong-wook.” (Story P)
Unexpected events and the showmanship of the actors is what made “Laundry” another long-running musical despite its relatively weighty plot, which centers around issues such as illegal residents, foreign workers and alienation of the disabled.

Actors roam among the audience throughout the play, helping onlookers loosen up a little and get familiar with the subject. The audience gets most excited when they are all invited onto the stage during a fan meeting scene and are handed out autographs of the actors. The musical, which started in 2005, has recorded about 200,000 visitors so far.

“While You Were Sleeping,” a musical which over 200,000 people watched during its past six-year run, is also known for various events that happen among the audience as well as on-stage during the show.

While developing the story to solve a mystery that happens in a Catholic hospital on a Christmas day, the performers deliver letters, roses and autographs to the audience during the performance.

“Several long-running little theater musicals which have a well-built story line are contributing to the invigoration of original plays,” said Cho Yong-shin, a musical critic.

“While You Were Sleeping” is staged as open run at Daehangno Art Madang in Hyehwa-dong, central Seoul. For more information, call (02) 747-2114.