Yoon So-ra had been dreaming of a sleek, smooth-driving sedan for her first car. After three years on her first job, the 27-year-old office worker is now more budget-conscious and leaning toward cheaper, energy-saving small cars.

“I first thought of buying a mid-size used car,” Yoon said while looking around a Kia Motor Corp. dealership in Seoul. “Now look at gas prices. If you are to buy a car these days, a city car is surely the smartest choice.”

She is among a growing number of Korean consumers turning to vehicles that are small, affordable and eligible for a variety of incentives, as they strive to counter soaring fuel costs.

In February, sales of city cars jumped a whopping 45 percent from a year earlier, according to the Korea Automobile Manufacturers Association. The segment accounted for 18 percent of the total automotive market, the highest since 1999.

Leading the boom is the Morning, which sold 12,160 units that month alone. Since its introduction in 2004, Kia has sold more than 1.1 million units of the first model. Its latest upgrade hit the market in January. 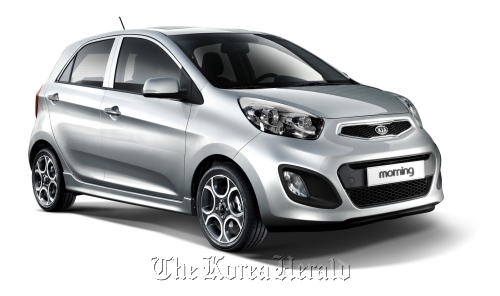 City cars’ popularity is attributable to tax benefits, lower petrol consumption and a 50-percent discount on highway tolls, as well as convenience in large cities crowded with traffic, including easy parking.

“Look, for a round-trip from Seoul and Busan, you’d have to fill up probably twice and the toll would not exceed 20,000 won ($17.70). Though gas prices are crazy right now, driving isn’t bad at all compared with paying more than 100,000 won for the KTX, given the convenience and mobility,” Yoon said.

Spiraling fuel costs have been increasing the burden on drivers in recent months.

Crude prices topped $100 per barrel amid the ongoing turmoil in North African and Middle Eastern countries. Fears of a possible supply crunch drove up the prices at pumps here to the highest level in years.

Such jitters are reflected in the used car market as well.

“We’ve been getting lots of inquiries about city cars and hybrids recently,” said an official with Carz.co.kr, an automotive vehicle valuation website. “Those cars, hybrids in particular, weren’t so popular in the used market. But with 2,000 won per liter oil prices, people are scrambling for less energy-hungry models, even if they are old.

Albeit small in numbers, fuel-economic subcompact and hybrid vehicles have been luring cost-conscious customers.

According to KAMA, the ratio of subcompact cars ― with an engine of between 1.0 and 1.4 liters ― to total sales hit 3.4 percent in December and January.

The segment hardly takes up a 3-percent share in the market, analysts said, ascribing the rare result to pricey fuel and the launch of Hyundai Motor Co.’s Accent.

While domestic hybrids such as the Avante LPi and Forte LPi lost steam, the Japan-based auto giant’s Lexus CT200h snatched a 27-percent stake in the local hybrid market in a month since its February launch. 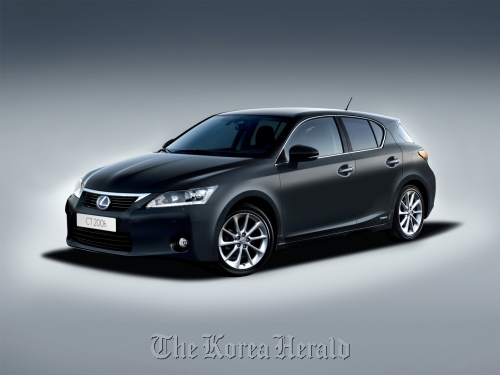 Toyota Motor Corp.’s Lexus CT200h (Toyota Korea)
“I believe Korea has already passed an era in which only a few ‘upper-class’ people can enjoy the privilege of owning an import car,” an industry official said.

For Hyundai and Kia, high price tags and the use of liquid-petroleum gas over petrol have been eroding sales of the Korea’s first two hybrid electric vehicles.

LPG is cheaper than gasoline but LPG-powered engines are less powerful and less fuel-efficient than their gasoline counterparts, critics said.

The two models are to be discontinued this year, officials said.

But the automakers remain upbeat as they are ready to release gasoline-motorized electric hybrid versions of their mid-size sedans ― the Sonata and K5 ― in the first half of the year.

“The current LPi models were, say, benchmarking tools for us to explore the new sector with government support,” an official at Hyundai Motor Group, which owns Hyundai Motor Co. and Kia. “You can expect more later this year.”

In spite of the upcoming launches, KAMA projects local sales of mid-sized cars to dwindle nearly 5 percent to around 3 million units this year, accounting for about 24 percent of the total.

But city cars would see their slice grow by almost 7 percent, it said, taking up 13 percent of the market.

Combined sales of compact and subcompact cars are also expected to top 27 percent of the total, up 6.5 percent from a year earlier.