That wasn’t the case with “Mars Needs Moms,” where filmmakers used a process called motion capture to create the animation. Instead of just speaking, the actors had to perform every scene. Film of those performances was used to make computer-generated images.

“This was the hardest acting job I’ve ever done,” says Seth Green, who spent most of the four-week shooting schedule in a harness to simulate the lesser gravity of Mars.

Motion capture allows for some movie magic. The 36-year-old Green ends up looking like a 10 year old.

Actors performed the scenes on a soundstage with only minimal scenery. If characters had to hold items ― like phones ― they were given pieces of plastic with similar shapes. They wore nondescript, tight-fitting suits to help animators work with their movements.

Multiple cameras, including an array around each actor’s face, filmed the scenes.

Many of the actors ended up with bumps and bruises. Elisabeth Harnois said her face ached because her character perpetually smiles. And every step she took had to be carefully choreographed because apparently a Martian’s gait is more like a horse’s stride.

“One of the great compliments that our director Simon Wells gave me was that the thing that everyone needs to appreciate is that it takes a certain kind of actor to be able to deliver a performance in motion capture,” Harnois says. “Some of the greatest actors often don’t come across because they are more subtle actors.

“I can be subtle but I knew for this I had to go to my childhood, Disney, over-the-top place. There’s something so liberating about doing that.” 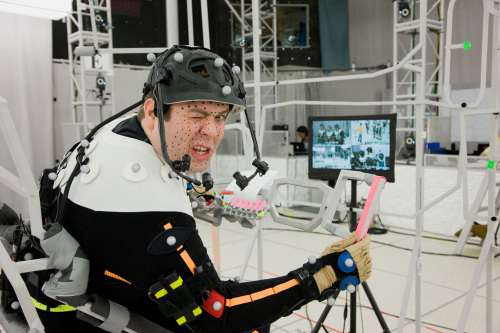 “Elisabeth and Mindy (Sterling) came in already fluent in Martian. They could ad lib stuff that sounded marvelous,” says director Simon Wells. “We came up with a list of instructions, exclamations, emotional ideas we needed and they would come up with the phrase.”

Those ad libs became a Martian dictionary that was recorded and given to the rest of the cast.

Joan Cusack didn’t have to worry about the new language, since she plays one of the Earth moms Mars needs. Despite the physicality, she says she loved the motion capture work.

“It’s completely different from working on a film like ‘Toy Story’ because this is really performance,” Cusack says. “This is really acting because you’re there and working with other people. It’s really fast and really fun.”