[ The Korea Herald – Send E-mail ]
Giving back takes perseverance, a little honesty
By Paul Kerry
Published : Mar 15, 2011 - 18:23
Updated : Mar 15, 2011 - 18:23
Like many new English teachers in Korea, I arrived with huge ambitions. I would not only absorb everything I could about Korean language, culture and history, but also give back to the culture and community that was hosting me as a Fulbright English Teaching Assistant.

I imagined a montage in which I was Richard Dreyfuss in “Mr. Holland’s Opus” by day and Edward James Olmos in “Stand and Deliver” by night and envisioned each of my classes ending with impassioned students leaping atop their desks to recite Walt Whitman.

It turned out that getting involved in cultural exchange and community service outside of school is difficult. For the first few months, my days and nights were spent meeting my teaching responsibilities, studying Korean and adapting to my new culture, which included trying to be a good homestay daughter. Even if I found the time, I didn’t know where to look for opportunities, I felt limited by my Korean language skills and I was unsure of what I was able to do.

Then during my second semester, with the help of a friend, a little more Korean language and a lot more resolve, it happened. Ashley Stoffers, a former Fulbright fellow and EPIK teacher, told me about KKOOM, a charity dedicated to helping children living in Korean orphanages and group homes. KKOOM maintains a website with contact details for orphanages all over Korea. 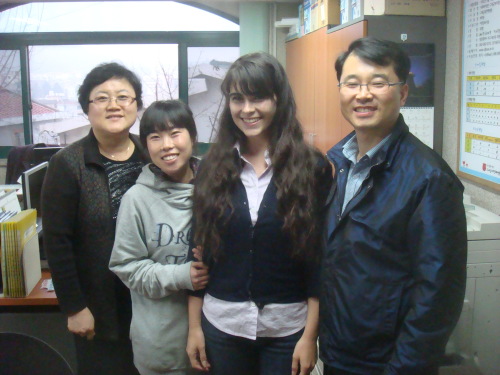 Dara Kaye (second from right) with So Hyang-ok (left), executive director of Daejeon Salvation Army Children’s Home Gil Young-ju (second from left), director of the orphanage and orphanage president Park Ha-yong.  (Dara Kaye)
Ashley, who speaks Korean, contacted local orphanages. Together with two other Fulbright grantees, we began volunteering at the Daejeon Salvation Army Children’s Home for two hours every week. Chungnam Science High School, where I teach, even graciously allowed me to consolidate my teaching schedule so I had enough time to volunteer.

Each week we prepared a game or project, usually with an English component. For example, during the World Cup, kids and adults alike had football fever, so we played soccer and somewhat incidentally taught them English soccer vocabulary. While my role as a formal teacher is somewhat limited ― I spend a good portion of my time there posing as a human jungle gym and hug machine ― we all had a great time trading English and Korean words, marveling over the similarities between 팀/team and 골인/score a goal.

The kids are bright and energetic and well cared for. The Salvation Army provides the children with a home, food, clothing, education and support and the older children lavish the little ones with kindness and care. Although it is far from the depressing Dickensian place I’d imagined, it is also clear that the kids crave attention and affection from volunteers and the few staff. The younger children beg to be held and carried, to sit in my lap and to hold my hand. As the Children’s Home’s executive director So Hyang-ok says, the children have “scars on their hearts” from the difficult situations that brought them to the group home.

The children also have more concrete needs. The tight budget means the Children’s Home is perennially rationing basics like shampoo and soap and the children have no computers to use for schoolwork, which puts them at yet another distinct disadvantage compared to children in conventional homes. To complete assignments, older students must walk to the PC room on the main road. It then becomes difficult for them to concentrate in the smoky room among Starcraft-playing teenagers.

I knew I couldn’t do anything about their pasts. I also knew I could not really even be an emotional resource in the same way a Korean speaking volunteer could. But I thought maybe I could put the skills I do have to good use and help find the home some resources to help meet their material needs. In January, I launched a website with photos and news for volunteers and allies of the Daejeon Salvation Army Children’s Home at koreakids.webs.com and challenged friends and family to help me raise $1,500 to buy three desktop computers for the children.

Donations came in quickly, mostly in denominations of $10 or $25 from American college students and recent graduates. I was very touched when even the most cash-strapped friends donated what they could. CSHS’s computer teacher Moon Kwang-sik helped me navigate Korean shopping sites to find computers within our budget. KKOOM president and director Aimee Jachym helped me arrange to accept tax-deductible donations through KKOOM and the PC Project was a success, raising $1,500 from 36 donors in 15 days.

When we told So that we had collected enough money to buy the computers, her gratitude was mixed with surprise. For her and the orphanage staff, every step in creating a future for the children is burdened with financial and human resource challenges. The idea that dozens of foreigners had decided to help take on this one challenge to improve the kids’ education seemed extraordinary to her.

I continue to visit the orphanage every week, with two other Fulbright ETAs. I maintain a website to bring together English-speaking volunteers, donors and allies of the Children’s Home at koreakids.webs.com. I’ve also started volunteering two Saturdays a month teaching English to the children of North Korean refugees through a church in Seoul (for more information on that class, contact Nikki Muyskens at the_color9@msn.com). While perhaps my original, Hollywood-inspired ideas for my time in Korea were overly ambitious, I found that with perseverance and an honest inventory of what time and skills you have to offer, it is possible to give back something meaningful as a foreigner in Korea.